Russia: Things to do

Every country has its outstanding and special attractions. Goway has selected its top 18 things to do in Russia (not in any particular order) for you to enjoy on your visit to this destination. 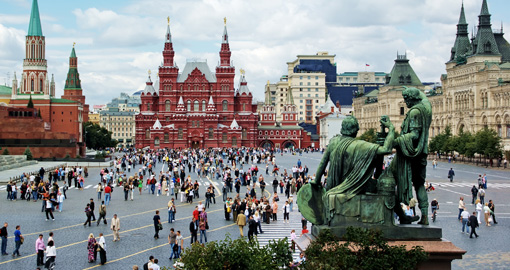 This is the heart of the city and contains many of the important highlights on Russia vacations. The buildings surrounding the square are all significant. It is closed to traffic and is the venue for many massed parades such as the one on May Day. The Kremlin’s towers and St. Basil’s Cathedral are illuminated at night. The fairy-tale multi-coloured onion-domed St. Basil’s Cathedral was first erected in 1560 and probably stands out more than any other building. The Cathedral is now a museum. Lenin’s Tomb is where he, one of the founders of the communist doctrine, lies in state. The Mausoleum can be visited for a short period of time. Red Square is for all intents and purposes a cemetery More than 100 people are interred here including Stalin, Gorky, the writer and Gagarin, the astronaut. The Kremlin is a complex of buildings which include 4 churches and the Armoury. The Armoury was originally a storehouse for weaponry. It now contains all kinds of treasures including the famed Faberge eggs and the 190-carat Orlov Diamond. Opposite the mausoleum is the GUM Store which is Moscow’s major consumer store. Although it has been modified in recent times, the traditional building itself is exceptional. Before the 1917 Revolution, it contained 1,200 stores. The convent, founded in 1524, is a carefully arranged complex of churches in a variety of architectural styles. The fortress-like walls surrounding the convent were originally built to imprison daughters, sisters and wives of the nobility. Today, it is a haven of tranquility. The cemetery was one of the most prestigious burial sites in the 18th and 19th Centuries. It contains the gravestones of many of Russia’s literary, musical and scientific heroes such as Chekhov, Shostakovich, Eisenstein (the movie director), Gogol and Bulgakov (both writers). Boris Yeltsin is also buried here. In 2004, it was proclaimed a UNESCO World Heritage Site. 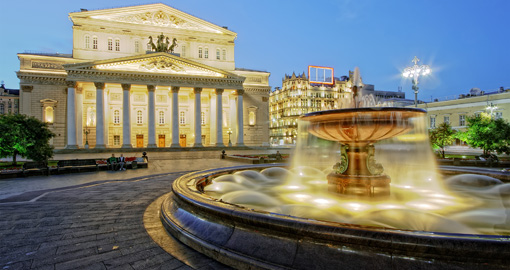 The Bolshoi Theatre is a historic landmark in Moscow where concerts of ballet and opera are performed. The Bolshoi Ballet is the oldest and largest ballet company in the world with more than 200 dancers and the Bolshoi Opera is also one of the oldest. The productions include 3 or 4 new ballets or operas per season. Tickets can be purchased online or at the theatre on Russian tours. You can also view the performance schedule online. 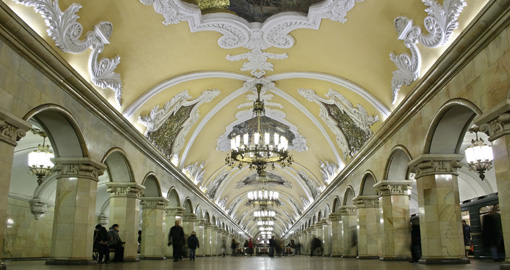 The Moscow subway is called the most beautiful in the world because 44 of the nearly 200 stations are listed as cultural heritage sites due to the architecture and works of art there. In some respects, this is an underground museum as well as a transit system. The first station to become artistically endowed was in 1934. It is well worth either going for a ride or, at least, visiting one station on Russia vacations to admire the platforms where the majority of the art is located. Arbat Street is a pedestrian street about one kilometre/half a mile long in the historical centre of Moscow and one of the oldest surviving streets in the Russian capital. Originally it was part of an important trade route and home to a large number of craftsmen. During the 19th and early 20th Centuries, it became known as the place where nobility, artists, and academics lived. During the Soviet period, it housed many high-ranking government officials. In 2016, it became gentrified and is now a popular street to visit with numerous restaurants and cafes. 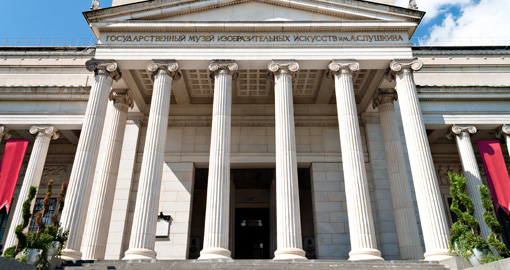 This is Moscow’s major art gallery featuring foreign painters, mainly European including works from the Italian Renaissance and Dutch masterpieces. It also has an excellent collection of impressionist and post-Impressionist paintings. The Museum of Private Collections has collections donated by private individuals. There are additionally collections of ancient Egyptian jewellery, weapons and tombstones. 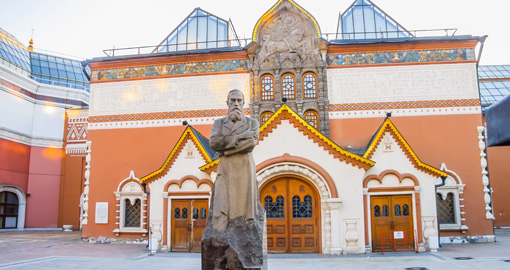 This art gallery is known for its Russian fine art. A Moscow merchant, Tretyakov acquired works by Russian artists in the mid-1800’s eventually creating a collection of around 2000 works of paintings, drawings and sculptures. Today the collection numbers more than 130,000 exhibits. Near the gallery, there is a sculpture garden called "The Graveyard of Fallen Monuments" which displays statues from the former Soviet Union that were relocated here. This imposing historically famous building was reconstructed during the reign of Catherine the Great (1729-1796) who ordered three adjoining buildings to become today the Winter Palace and the Hermitage Museum. The Winter Palace was home to the Czars from 1732 to 1917 when the Soviets stormed the palace during the Russian Revolution. The palace was built to show off Russia’s greatness and wealth. The palace has around 1500 rooms, 117 staircases and almost 2,000 windows. The Hermitage exhibits in the Winter Palace relate to Peter the Great (1672-1725) and include paintings and personal artifacts from Peter I’s reign as well as the Czar’s gilded carriage. You can visit the Czar’s private rooms including his study and dining room. 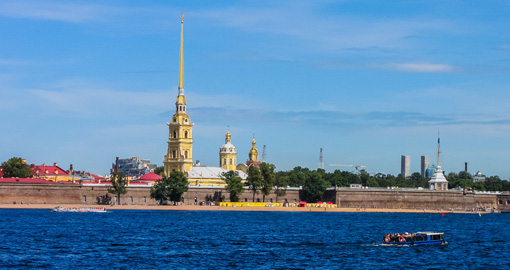 This is the original citadel of St. Petersburg founded by Peter the Great in 1703. In the early 1920s, it was used as a prison and execution ground by the Bolshevik government. In 1924, it was converted into a museum and today, it is the State Museum of the History of Saint Petersburg. The fortress contains several buildings clustered around the Peter and Paul Cathedral which has the tallest bell tower in the city. The cathedral is the burial place of all the Russian Czars from Peter the Great (1672-1725) to Alexander III (1845-1894). Other structures inside the fortress include a functioning mint, the Trubetskoy Bastion with its prison cells and the city museum mentioned. 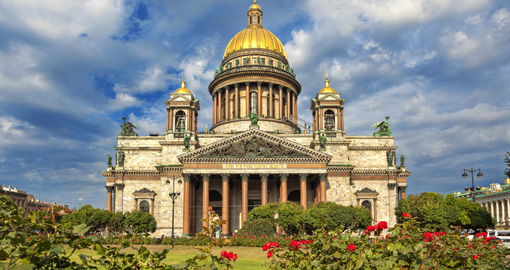 This beautiful building has a golden dome which dominates the city’s skyline. The cathedral is the second tallest building in St. Petersburg after the Peter and Paul Cathedral, built between 1818 and 1858. Today, it is a museum although church services are held throughout the year in only one of the cathedral’s chapels. If inclined, on Russian tours, you can climb the 262 steps to the colonnade around the dome and experience wonderful city views. More than 100 kilograms of gold leaf was used to cover the dome. The cathedral’s interior is decorated with masses of gold, malachite, lapis lazuli and bronze. This is a 1900 Russian-protected ship, currently preserved as a museum ship. The Aurora played an important role in the Bolshevik Revolution of 1917. It fired a blank shot at the Winter Palace, then the residence of the Provisional Government, giving the signal to signal to the workers, soldiers and sailors of the city to storm the palace. This incident was the beginning of years of Communist leadership. The Aurora is now maintained by cadets and admission is free, but for an extra fee, you can tour the engine-room. 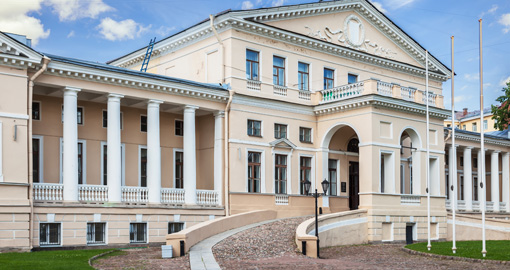 This is a property formerly owned by the affluent Yusupov family until the palace was confiscated in 1917 by the Bolsheviks. This palace is best known as the site where Rasputin, a confidant of Nicholas II, was assassinated. Today the murder has been recreated with wax models, documents and photographs in a special assassination exhibition. Many of the original architectural and decorative features of the palace have been preserved and you can visit the reception rooms, living quarters, White Column Hall and the rococo Palace Theatre. There are more than 40,000 works of art in the palace including works by Rembrandt and sculptures. 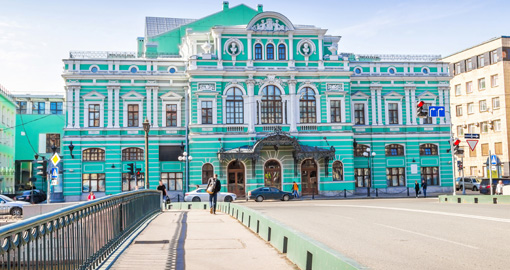 For over 200 years, this theatre has been home to one of Russia’s best opera and ballet companies. The Opera and Imperial Ballet Company was founded in 1783. The theatre stands on the site of an earlier performance venue, the Imperial Circus. The theatre has neo-classical designs with Byzantine motifs, gilding and a ceiling fresco by Enrico Franciolli. There is an amazing chandelier designed by Albert Cavos. The building is a huge neo-classical structure which surprises with its size and decor. There are no tours of the theatre so you need to attend a performance to see inside its beautiful interior. 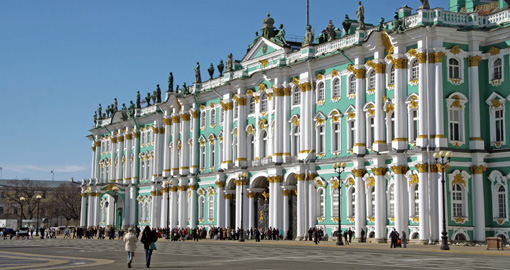 This is one of the oldest museums in the world, founded in 1764 by Catherine the Great and opened in 1852. There are over 3 million works in this vast building. To see the whole museum on a Russia vacation would take days on end. Every type of art from every possible era is included in the museum. The State Rooms with their period furniture and decoration are just as important and impressive as the art. In the Treasure Galleries, there are priceless items including Sarmatia gold work and Faberge eggs. Some of the rooms are used to display art and others period furniture. There is everything here from ancient Egyptian artifacts to modern art. 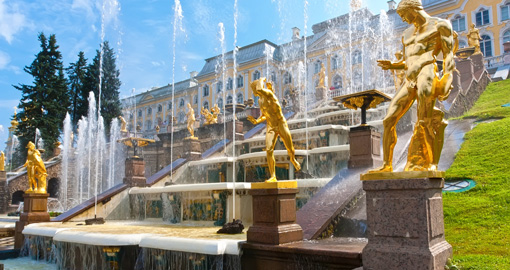 This palace and gardens are the Russian equivalent OF Versailles in Paris and are a UNESCO World Heritage site. The palace estate is made up of more than one palace but the Grand Palace is the main attraction. The palace estate was commissioned by Peter the Great to be more impressive than all other European palaces and was completed in 1721. More than 20 museums exist in the complex. The Grand Palace and other palaces within the estate are lavishly decorated with priceless works of art and exquisite craftsmanship including antique authentic period furniture. The museums include the Special Treasury, Monplaisir Palace, the Marly Palace, the Imperial Yacht Museum, the Church Building Museum and the Museum of Playing Cards. The gardens are dominated by huge and intricate fountains. The Lower Garden fountains are particularly spectacular. The Upper Garden also has many fountains including the Grand Cascade with 64 fountains. This was originally a small palace given as a gift to Catherine I from her husband Peter the Great. The palace was enlarged under architect, Rastrelli. The reconstruction took 4 years and was completed in 1756 with a palace complex covering 1 kilometre/half a mile in circumference. More than 100 kilograms/220 lbs of gold were used in the decoration. Until 1910, the palace was called Tsarskoye Selo (Pushkin). Today the palace houses a museum which presents the 300 years of the structure’s history. The decor, mosaics, murals and stucco work are outstanding. Especially remarkable are the state rooms designed by Rastrelli. In front of the palace are the former palace gardens which now make up Catherine Park. 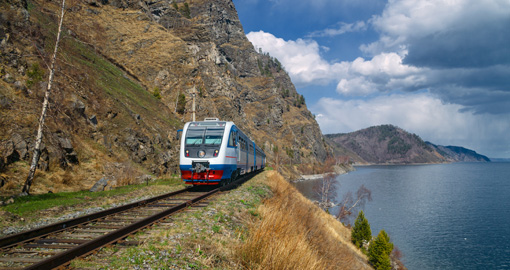 The total time that can be spent on this train on Russian tours that travels from Moscow to Eastern Asia is usually 7 days. The length of the routes is around 10.000 kilometres/620 miles and it is the longest railway line in the world. The Trans-Siberian travels from Moscow to the Pacific terminus of Vladivostok via the cities of Perm, Yekaterinburg, Omsk, Novosibirsk, Krasnoyarsk, Irkutsk, Chita and Khabarovsk. With an average speed of 60 kilometres/37 miles per hour, the Trans-Siberian train journey is something to relax on and have a wonderful experience through the Russian countryside while visiting the towns en route. The Trans-Mongolia Railway follows the same route as far as Ulan-Ude on Lake Baikal and then continues to Ulaanbaatar in Mongolia and Beijing in China.