Things to do in Scotland

Every country has its outstanding and special attractions. Goway has selected its top 13 things to do in Scotland (not in any particular order) for you to enjoy on your visit to this destination. 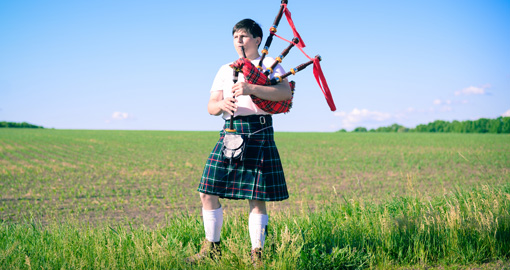 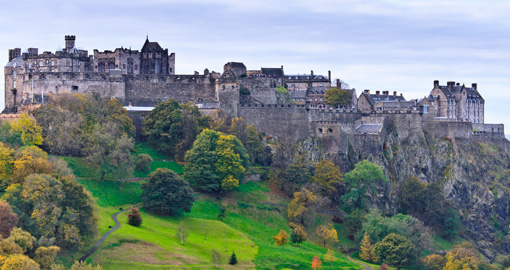 Edinburgh is Scotland’s capital and number one attraction. It is dominated by Edinburgh Castle, which sits on top of a rocky promontory right in the centre of the city surrounded by high walls. It houses the Royal Palace and the Royal Apartments once inhabited by Mary, Queen of Scots plus the oldest surviving building in Edinburgh, St. Margaret’s Chapel. The castle vaults were once a prison. Daily at 1 pm, you will experience the very loud noise of the firing of the One O’clock Gun (except Sundays). The quaint side streets are called closed house buildings ranging in design from medieval to Victorian. Grassmarket was once a medieval marketplace and site for public executions. Another famous street is Princes Street which runs along the bottom of the Castle with the attractive and popular Princes Gardens sandwiched between. This busy thoroughfare is home to many shops, restaurants and hotels. Another outstanding place of interest is Arthur’s Seat situated next to Holyrood Palace. This is a large hill from which you can have excellent views of the city and also the site of a large, well-preserved fort and the 15th Century St. Anthony’s Chapel. On Scotland vacations, the world-famous Edinburgh Festival usually takes place in August. This is a major celebration of the arts including theatre, music and drama with artists from around the world performing. The Royal Edinburgh Military Tattoo takes place at the same time and is performed by different military bands. Another important landmark is the imposing Holyrood Palace, the Queen’s official residence with its 14 historic state apartments and the ruins of the nearby Holyrood Abbey plus the beautiful gardens. 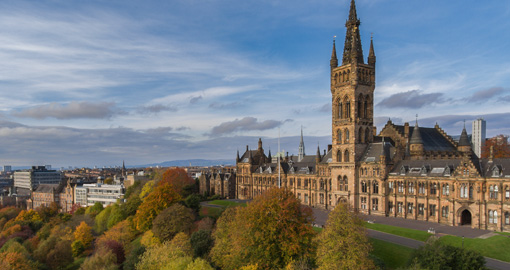 Glasgow has developed over the years to become a major tourist on a trip to Scotland centre. This is helped by: its many excellent museums and art galleries, its visually outstanding architecture, its vibrant nightlife, its impressive shopping and its attractive green spaces. The Kelvingrove Art Gallery and Museum houses one of Europe’s greatest and most eclectic collections (22 galleries with 8000 objects/paintings). It has an excellent room of Scottish art, a room of fine French impressionist works plus renaissance paintings from Italy and Flanders. The University of Glasgow's Hunterian is the oldest museum in Scotland. It covers the: Hunterian Museum, Hunterian Art Gallery, Mackintosh House, Zoology Museum, and the Anatomy Museum all on the campus of the University. Architecture in Glasgow is synonymous with the famous Scottish architect, Charles Rennie Mackintosh. His works include the Willow Tearooms, Glasgow School of Art, House for an Art Lover, Scotland Street School and The Lighthouse. The Riverside Museum is a special museum whose exhibits involve transport and travel; ranging from horse-drawn carriages and the world's first pedal-powered bicycle to model Clyde-built ships plus assorted railway locomotives and streetcars. There is also an amazing recreation of a Glasgow shopping street from the early 20th century. In Glasgow’s West End, which includes the University of Glasgow, Ashton Lane is a bohemian quarter of ornate sandstone tenements and cobbled streets which are well worth exploring with an outstanding range of vintage and design stores, cafes and bars. Green spaces abound in the city which has a total of 90 parks of which the best-known is Kelvingrove Park, a classic Victorian park by a river next to the renowned Kelvingrove Museum and Art Gallery. You can take a riverside walk and visit the Botanical Gardens. 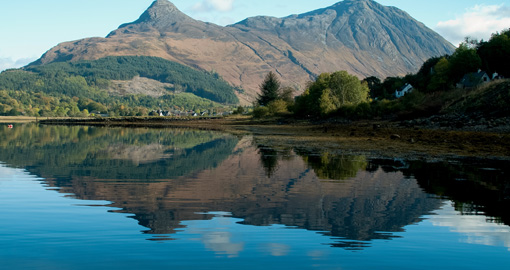 Easily accessible from both Edinburgh and Glasgow, Scotland’s Highland region covers the northern two-thirds of the country and contains much of the country’s most spectacular scenery and unspoilt natural beauty. It is a combination of mountains, glens, lochs, and rivers surrounded on three sides by a rugged coastline. It contains some of Europe’s most extensive wilderness areas; many of which have been designated as national parks. Fort William is a town which is overshadowed by Scotland’s (and the UK’s) highest mountain Ben Nevis, 1,345 metres/4,370 feet high. The town itself is attractive, offering cozy pubs and cafes. Inverness is an excellent centre for touring the Highlands on Scotland tours. It is known for its castle perched on a hill as well as a number of historic buildings in the Old Town. The Inverness Museum and Art Gallery provide a good general overview of the development of the Highlands. There are many lovely riverside restaurants and bustling pavement cafes as well as a wide range of shops in the Old Town. The Cairngorms National Park has mountains, huge forests, rivers, waterfalls, lochs, wildlife small villages, and whisky distilleries to satisfy every visitor. It is also the centre of Scotland’s ski industry with Aviemore being the main ski resort. Glencoe is a picturesque village at the mouth of the famous glen of the same name where you can experience rugged mountain scenery at its best. It is one of the most beautiful places in Scotland. 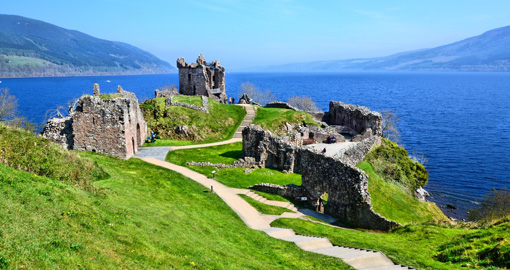 Loch Ness is a 36-kilometre/23-mile long lake, the second largest Scottish loch in surface area after Loch Lomond and is extremely deep. Due to its great depth, it is the largest by volume in the British Isles. It contains more fresh water than all the lakes in England and Wales combined. It is “home” to one of the world’s most mystical tales – the legendary Loch Ness Monster, also known as Nessie. At Drumnadrochit is the Loch Ness Centre and Exhibition which examines the natural history and legend of Loch Ness. Boat cruises operate from various locations on the loch shore, giving visitors the chance to look for the "monster”. Urquhart Castle, a medieval fortress, is located on the western shore. 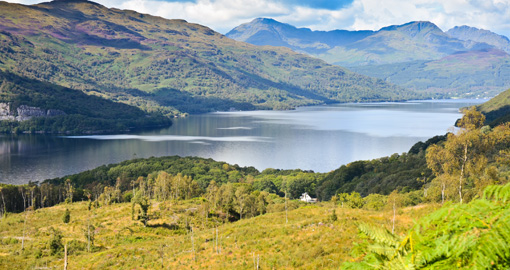 Loch Lomond is the UK’s largest lake, located right in the centre of the Trossachs National Park (the UK’s 4th largest). It is 8 kilometres/5 miles wide at its broadest point and there are 30 islands, three of them inhabited. Known as "The Queen of Scottish Lakes", due to its natural beauty, it attracts visitors of all kinds on Scotland vacations – day-trippers, water sport enthusiasts, hikers, and anglers. For a short cruise on the loch, you can board the paddle steamer, the Maid of the Loch at Balloch. 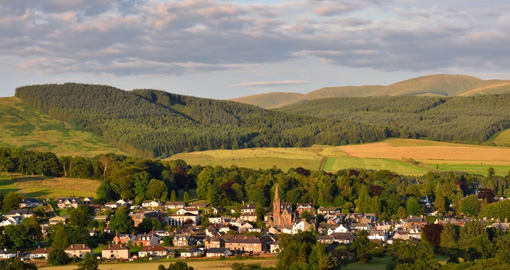 The Lowlands are simply the region south of Edinburgh and Glasgow. They consist of rolling hills and moorland in the west to gentle valleys and a picturesque coastline in the east. There is lots of history to be experienced through ancient abbeys, stately homes, and historical castles. These include Melrose Abbey, a magnificent ruin with incredibly decorated masonry dating back to the 15th Century, Jedburgh Abbey, dating back to the 11th Century, Abbotsford House, former residence of the novelist and poet, Sir Walter Scott, and Mary, Queen of Scots House a museum with displays of memorabilia of Mary, including jewellery, belongings, documents and paintings. 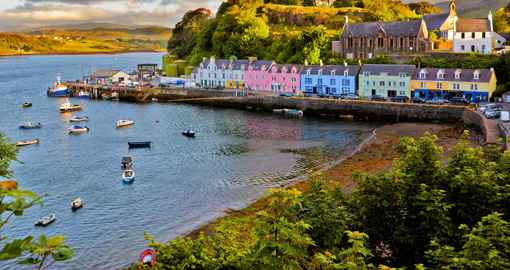 There are many wonderful islands that make up the Inner and Outer Hebrides. The Isle of Skye is an island which has dramatic mountains in the middle surrounded by a coastline of peninsulas and bays with dramatic sea cliffs. Skye has some of the most stunning mountain scenery in Scotland. Apart from the scenery, there are castles, museums, cozy pubs, art galleries, and craft shops to visit. Dunvegan Castle has a 14th Century dungeon. Duntulm Castle is allegedly haunted. 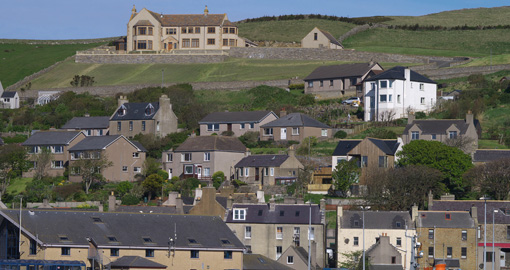 The Orkneys are a group of 70 islands, 20 inhabited, situated 16 kilometres/10 miles off the extreme north of Scotland. The landscape is fairly flat but enchanting. There is much folklore associated with the Orkneys. It has been invaded by the Norse and the Vikings centuries ago who have left their legacy. There are mystical stone circles and monuments dating back thousands of years. The best-known sites are the Ring of Brodgar, built around 2500-2000 BC, a site of ancient rituals and ceremonies, and Skara Brae, a prehistoric village, older than the pyramids and Stonehenge. Everywhere you go in the Orkneys you will see birds and animals, which include seals, puffins, and many seabirds, plus off-shore there are whales, and dolphins. 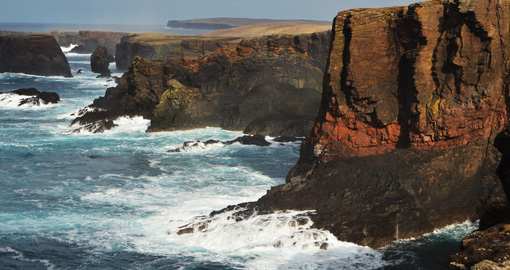 The Shetlands are further north, 80 kilometres/50 miles, from the Orkneys. Best known for its knitwear and ponies, the 100 islands – 16 inhabited, are also a nature reserve. There are deep glens and steep hills allowing scenic walks. Numerous seabird colonies exist which include: puffins, storm petrels and more rarely, albatross, and snow geese. You can easily see dolphins, seals, porpoises, and killer whales. You can purchase locally made, quality glassware, jewellery, and knitwear. 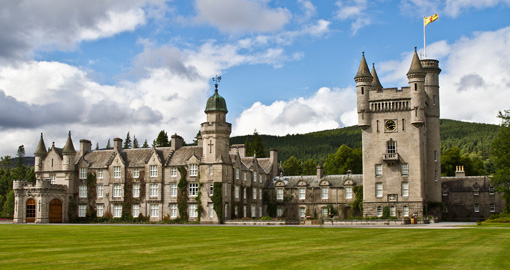 Balmoral Castle is one of the four “homes” belonging to Queen Elizabeth. Between April and July, the grounds, gardens, and the Ballroom are open to the public on a Scotland vacation. Balmoral has been a residence for members of the British Royal Family since 1852. Queen Victoria described Balmoral as her “Dear Paradise in the Highlands”. Braemar Castle dates back to the 17th Century and has been a hunting lodge, fortress and family home. It is located in the stunning Cairngorm Mountains and has rooms for viewing. Glamis Castle is an impressive, majestic building with turrets, and towers and was the legendary setting for Shakespeare’s Macbeth. It has been the childhood home of Queen Elizabeth and the late Queen Mother. Every painting, and furniture, is authentic and not from a museum. The gardens surrounding Glamis Castle are beautiful all year round. Stirling Castle is one of Scotland's most historically important sites and has been the home of many Scottish kings and queens. Highlights include the Great Hall, Chapel Royal, Castle Exhibition, Regimental Museum, Great Kitchens, Tapestry Studio, and the nearby Argyll’s Lodging, a 17th Century townhouse. 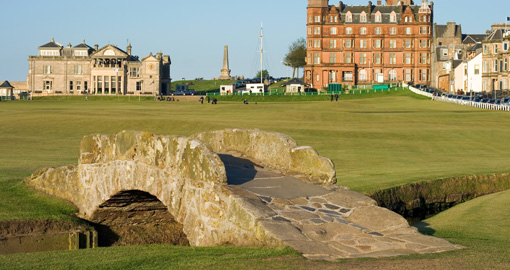 The first record of golf in Scotland dates back to the 15th Century, so Scotland can rightfully claim to be the home of golf. Because of this heritage, there are many excellent, renowned golf courses such as St. Andrew’s, Gleneagles, and Muirfield, plus some associated with Donald Trump, Turnberry and Troon.

Note the spelling. Spelt whiskey, that’s the Irish way, just as Scotch is a drink and Scots are people. Scotch can only be made in Scotland and must be matured for a minimum of 3 years. There are over 100 distilleries in Scotland. The success of the industry it is said is because of the water in Scotland plus of course, the distillation process.