DELUXE | CRUISE: Discover the natural playground of the Galapagos Islands and spot rare species such as blue-footed boobies, giant tortoises, and frigate birds on a cruise throughout the archipelago. Stay aboard a 5-star catamaran and choose from 5 to 8 day itineraries to see the wonders of the islands. 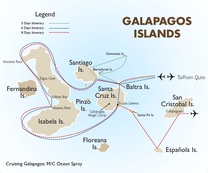 The M/C Ocean Spray offers three comprehensive itineraries, ranging from 5-8 days, which take you throughout the islands to see a variety of landscapes and wildlife. Explore the world’s greatest natural playground aboard the M/C Ocean Spray.

Departing from Baltra Island, this 5-star ocean vessel offers excellent service and maximum comfort while exploring the islands. The itineraries are as follows:

Start on Bartholomew, a moon-like landscape of volcanic rocks to the east of Santiago. Walk the boardwalk and hike up to the viewpoint where you can gaze out over the golden beaches surrounding Pinnacle Rock. You’ll also see Galapagos Penguins. On Genovesa, discover a great spot for birdwatching, where you’ll find frigate birds, swallow-tailed gulls, and blue-footed boobies. On Santiago, stop off at Buccaneer Cove, Espumilla Beach, and James Bay to see some of the diverse animals calling the island home, including marine iguanas, flamingos, sea turtles, Darwin finches, and fur sea lions. On North Seymour, you’ll spot frigate birds, with their puffed up red chests, and sea lions before continuing to Santa Cruz, the most popular island in the archipelago. Visit the Charles Darwin Research Station and spot the Giant Tortoises breeding in the highlands. On your final day, head to the tiny island of Mosquera to see one of the islands’ largest sea lion colonies before returning to the airport to depart.

First stop is Sombrero Chino or Chinese Hat, the aptly-named island to the southeast of Santiago that has a great population of sea lions at Puerto Egas. On Isabela, the largest of the islands, you’ll stop off at Vincente Roca Point to explore waters filled with seahorses, sea turtles, and fascinating sunfish. On Fernandina, discover the most pristine ecosystem in the islands, which no foreign species has ever invaded. Stop off at Espinosa Point to see the flightless cormorants that call the island home. The next day, visit Tagus Cove and Urbina Bay to explore the volcanic landscape of black rocks and the occasional smoking volcano. At Elizabeth Bay, ride through a waterway of red mangroves as well as blue-footed boobies, Galapagos penguins, and brown pelicans. Continue to Moreno Point to explore crystal tide pools teeming with sea life and pink flamingos crossing the landscape. On Santa Cruz Island, you’ll visit the Charles Darwin Research Station and the volcanic highlands. On your final day, explore North Seymour, with its frigate birds, before returning to the airport.

The 8-Day Itinerary has many of the same stops as the 6-Day Itinerary, with a few notable inclusions. The first five days are the same as on the 6-Day Itinerary. After exploring Santa Cruz, head to South Plaza to pass through a landscape of prickly pear cactus and spot yellow and red land iguanas across the volcanic rocks. On Santa Fe, head on a hike along a trail through the cactus grove and spot some of the many seabirds that populate the waters, including shear-water petrels and swallow-tailed gulls. Continue to Espanola, the geographically oldest island in the archipelago, and see the world’s only nesting grounds for waved albatrosses. In addition to these massive birds, Espanola has Giant Tortoises, Darwin finches, blue-footed boobies, and other fascinating Galapagos species. On your final day, head to San Cristobal to visit the capital and the Interpretation Center before returning to the airport.

You will arrive at Baltra Island in the morning. After passing through immigration and baggage claim you will be met by Ocean Spray staff and transferred to the yacht. You will be shown to your cabin where you will have some time to settle in before lunch and a welcome briefing.

This afternoon, visit Sombrero Chino, named after its shape formed by volcanic rock giving it the name, Chinese Hat. Since it was given a maximum visiting capacity by the National Park Service it offers rare, up close viewing of Galapagos wildlife and well preserved remnants of fragile volcanic rock that can't be found in such a unique condition anywhere else. The islet is home to a colony of sea lions on the white coral sand beach. Here you can see American Oystercatchers, Galapagos Penguins swimming along the shores, and Sally-Lightfoot Crabs in bright contrast to the dark volcanic rock.

This morning, go to Isabela Island to visit Vincente Roca Point. Comprised of two separate coves, this site is a large bay with spectacular sea life. Keep an eye out for seahorses, sea turtles, and the strange yet fascinating Mola-mola (pacific sunfish).

In the afternoon, head to Fernandina Island to visit Espinosa Point. No foreign species have ever invaded Fernandina Island and therefore it is one of the world's most pristine island ecosystems. The volcano, La Cumbre, dominates the landspace with lava fields reaching the ocean. After crossing the Bolivar Channel which divides Isabela and Fernandina Islands, make a dry landing at Espinosa Point and after walking past a colony of marine iguanas and a group of sea lions, reach the island's highlight: the Flightless Cormorant nesting site. This area provides a great opportunity to see the Galapagos Hawk.

The morning visit, including Tagus Cove's 'cliff-side gallery', provides a clear view of pirate graffiti dating back to 1836. The contrast between vandalism and the pristine environment is thought provoking. Up the (1.2mi / 2km) hike through lava formations, you will see stunning views of the surrounding slopes and volcanoes, making our way to Darwin Lake. This salt-water crater-lake may have been filled with a tidal wave brought on by a volcanic eruption.

In the afternoon, you will land at Urbina Bay which presents some fascinating geological formations. In 1954, an uplift from the sea formed the bay; which has been characterized by the resulting terrestrial coral reef ever since. Expect to see stingrays and sea turtles swimming near the surface of the water, along with Flightless Cormorants, pelicans, and marine iguanas. You will be dazzled by the breathtaking view of the Alcedo Volcano.

The morning visit will take you to Elizabeth Bay, a secluded space lacking any landing sites. You will take a traditional 'panga' ride, passing the red mangroves and amongst the wildlife of the lively bay. Elizabeth is known for its marine life; you will probably see sea turtles and rays skimming the surface of the water. You may also see the Brown Pelicans diving for fish, penguins, Blue-footed Boobies &amp; possibly spot humpback whales.

In the afternoon you will visit Moreno Point, located south west of Elizabeth Bay. Here, a dry landing onto what was once flowing lava is possible. The lava has left craters in its wake, which formed crystal tide pools. By looking into the pools, you can peer into another world, as the marine life drifts by your window. In the brackish pools of this area, you may see pink flamingos, White Cheeked Pintails, and Common Gallinules. If you look carefully into the pools you may see whitetip reef sharks and some sea turtles.

In the afternoon you will visit the highlands of Santa Cruz where you will walk along a path, observing the hills, ferns, volcanoes, and rich wildlife. This area is home to giant tortoises, the exclusive Galapagos Rail, the Paint billed Crane and many other species.

In the morning, you will head to South Plaza Island. This small island with steep cliffs was formed by rising lava and is now covered by Opuntia cacti. It is also home to one of the largest sea lion colonies as well as colorful yellow and red land iguanas. The most characteristic plant is the Sesuvium. During the rainy season its colour is a greenish to yellowish tone and in the dry season (end of June through January) a bright red.

Your afternoon visit is to Santa Fe Island. Santa Fe is home to a small picturesque bay and anchorage on the island's northeast coast. The bay has two visitor trails, one leading to a scenic viewpoint atop a cliff and the other spanning from a small beach to a tall prickly pear cactus forest.

Espanola Island is the southernmost island of the Galapagos and is the breeding site of nearly all of the Waved Albatrosses in the entire world. Espanola is densely populated with mockingbirds, Blue footed and Nazca Boobies, Darwin finches, Galapagos Doves, hawks, red and green marine iguanas, and loads of sea lions.

In the morning, you will start at Suarez Point on a trail where you will have the chance to see Blue footed Boobie, albatrosses and Nazca Boobies. You will also visit a beautiful site on the ocean front where there is a cliff that the large albatrosses use as a launching pad! You'll have the chance to see the famous blowhole that spurts water into the air. The landscape is great for photography.

In the afternoon, you will visit the spectacular Gardner Bay. After landing, you can walk across a lovely white sand beach amongst a busy sea lion colony or dive into the water to swim with sea lion pups. It is the breeding site of nearly all of the world's 12,000 pairs of Waved Albatrosses.

In the morning, visit the Galapaguera or the Interpretation center on San Cristobal Island.

The Interpretation Center, located on San Cristobal Island was donated by the Spanish government and inaugurated by the Prince of Spain in 1998. Visitors can enjoy expositions on natural history, human history, and conservation. The conservation efforts represent the movement to protect the wildlife and natural environment through means of population and tourist control.

Galapaguera (Cerro Colorado) is a new visitor site on the northeast part of San Cristobal Island. The trees and shrubs surrounding the property are home to many birds including warblers, finches and mockingbirds. The area is also home to giant tortoises. The tortoises live in a protected area to protect them from introduced predators.

After this final visit, you will be transferred to San Cristobal's airport in time to catch your flight back to the mainland.