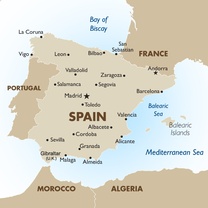 Spain is located on the Iberian Peninsula in southwestern Europe. Its mainland is bordered to the south and east by the Mediterranean Sea except for a small land boundary with Gibraltar; to the north and northeast by France and Andorra and to the west and northwest by Portugal. It also includes the Balearic Islands in the Mediterranean and the Canary Islands in the Atlantic Ocean off the African Coast. It is the second largest country in Western Europe and the fifth largest country in Europe.

Tourism is a very important part of the country’s economy and this is not surprising as Spain is blessed not only with remarkably good weather all year round but also with its cultural heritage, its many beach resorts and its exceptional architecture.

With the exception of the region surrounding the capital, Madrid, the most populated areas lie around the coast. Some of the larger major coastal cities are Barcelona, Valencia, Malaga and Bilbao. There is no doubt that beach resorts play a large part in Spain’s attraction for visitors. Consider the coastal regions which come to mind - the Costa Brava, the Costa Blanca and the Costal del Sol are the three major areas with several others lesser known adding to the mix. Then there are the off shore islands of the Balearics which encompass Majorca, Ibiza and Minorca and then the Canary islands consisting of Tenerife, Las Palmas and Lanzarote.

Culturally, there are many cities and towns to consider. The capital Madrid is a sophisticated city which has preserved its character with its historical neighbourhoods and streets with such landmarks as the Royal Palace, central Retiro Park and the Paseo del Prado. The city offers three major art galleries – the Prado, the Reina Sofia and the Thyssen.  Barcelona, which is the capital of Catalonia Province, has its own distinct flavour. Once a Roman city, it has a rich cultural heritage.  The city is adjacent to the magnificent scenery of the Costa Brava. The three cities of Andalusia in the southern part of the country, Granada, Seville and Cordoba offer a wealth of treasures.  Anyone interested in history and architecture will love visiting these outstanding examples of ancient Spain brought to life.  Another city of cultural interest is Bilbao with its amazing architectural gem, the Guggenheim Museum, designed by Frank Gehry.

There are many other contrasting cities and regions too numerous to mention. What is definite is that the choice in Spain could be overwhelming.

At Goway we believe that a well-informed traveller is a safer traveller. With this in mind, we have compiled an easy to navigate travel information section dedicated to Spain.

Learn about the history and culture of Spain, the must-try food and drink, and what to pack in your suitcase. Read about Spain's nature and wildlife, weather and geography, along with Country Quickfacts compiled by our travel experts. Our globetrotting tips, as well as our visa and health information will help ensure you're properly prepared for a safe and enjoyable trip. The only way you could possibly learn more is by embarking on your journey and discovering Spain for yourself. Start exploring… book one of our Spain tours today!