Things to Do in Madrid 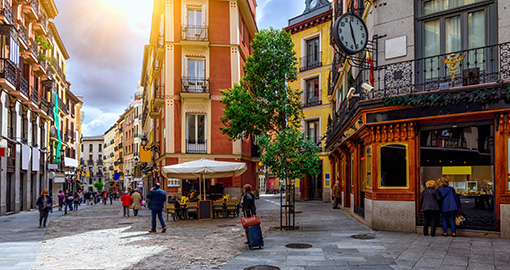 The beating heart of all things Spanish, Madrid is a European capital worth going out of your way for. Barcelona might steal the limelight with its eye-popping architecture, but Madrid is the cultural, economic, political, and entertainment hub of one of the world’s most culturally influential countries. Whether you’re here to party, explore, eat, or expand your cultural palate, here are some highlights to get your Madrid city break off on the right foot.

Madrid is a city in love with art, and you’ll find no greater collection in the city than at Spain’s national art museum. A vast collection including tens of thousands of works enshrines Goya, Rubens, Velazquez, Titian, El Greco, and many more, with over 1300 works on display at any given time. The ever-growing Prado will open an extension in nearby Salon de Reinos in 2019. For classical art lovers, there’s no more essential stop while in Madrid. 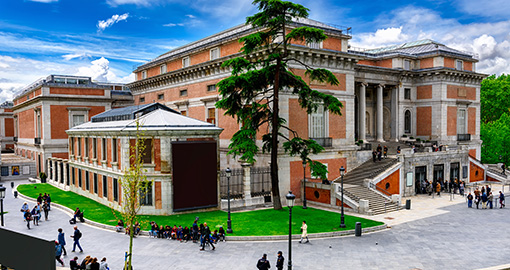 Madrid’s favourite outdoor playground is a beautiful green lung dotted with striking monuments, serene, well-ordered gardens, and attractive waterways. That’s not forgetting the appeal of pulling up a chair and a jug of sangria at one of the park’s outdoor cafes. The park comes alive through the warmer months with performances, art installations, and locals enjoying its many activities, particularly the lake. Don’t forget to spend some time gawking at the Palacio de Cristal, and see if you can find the park’s controversial monument to the fallen angel. 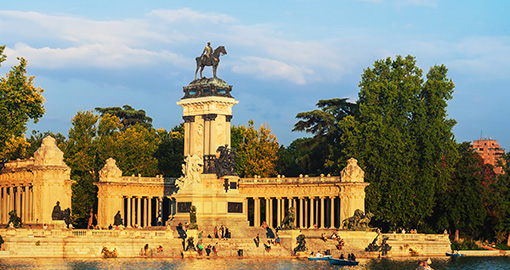 The Spanish royal family’s official city residence is worth a couple of hours of your time while in Madrid. Bask in the opulence of kings from Charles III to Alfonso XIII and put all that Spanish history in context, right up to the monarchy’s abolition in 1873. It was fascist dictator Francisco Franco who restored the monarchy, appointing King Juan Carlos I as his successor. Spain’s first king in over a century used his powers to restore Spanish democracy and step to the background. The Royal Palace’s role in today’s Spain is even more symbolic, though, at 1.45 million sq ft, it remains the largest functioning Royal Palace by floor area in Europe. 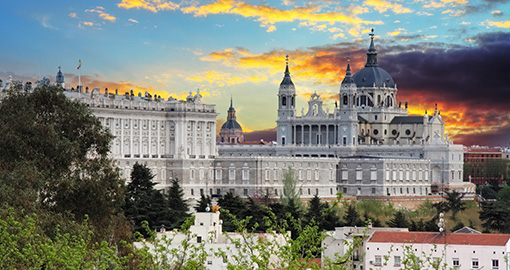 While it’s a popular tourist spot in Madrid (and priced accordingly), Plaza Mayor is a place of legend in Spain’s history. It’s best seen as part of a city tour, where your guide can frame things in their historical context. This was the centre of Old Madrid, dating back to Phillip III’s reign in the 1600s. He’s the fine figure you see riding a horse at the centre of the square. A place of revolution and restoration, there are too many stories for us to summarise here. But look sharp for the details of murals dotting the surrounding buildings. Then stroll over to Puerta del Sol for more Madrid history, and to snap your photo with the iconic El Oso y el Madrono – the tree-shaking bear that symbolizes the city. 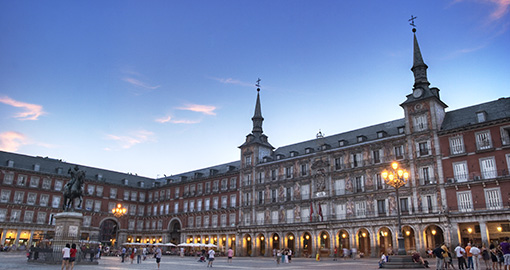 Located just steps from Plaza Mayor, San Miguel is Madrid’s most popular market and the city’s ultimate destination for a roaming tapas feast! Over 30 vendors sell freshly prepared small plates, along with fresh meats, baked goods, olives, cheese, and more. That’s saying nothing of the variety of beers and wines available. If you’re looking to taste real Madrid, San Miguel is a good place to start, despite its popularity with tourists. 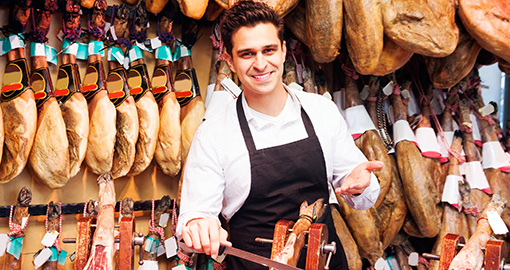 As Prado is to fine Spanish art, the Reina Sofia is to the 20th-century genius of Dali, Picasso, Miro, and more. Pablo Picasso in particular is represented by the museum’s greatest treasure, Guernica. It’s the centrepiece of one of the world’s largest modern and contemporary art museums, which showcases a heady mix of Spanish art, mixed with a respectable number of international artists. The museum itself is built on the site of Madrid’s first general hospital. 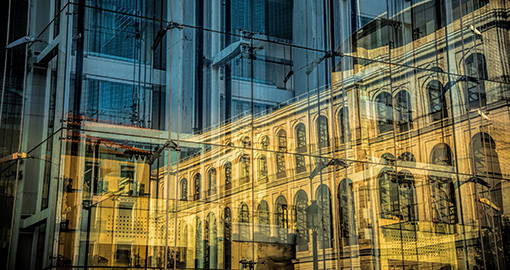 There’s much to be said for simply wandering Madrid’s streets, taking in its most awesome monuments. The Plaza de Cibeles is a good place to start, watched over by the intricate Cybele Palace, which serves as home to the Madrid City Council. A short walk from here brings you to Puerta de Alcala, Madrid’s answer to the Arc de Triomphe or Brandenburg Gate. The Metropolis Building on Gran Via and Calle de Alcala is the go-to establishing shot of countless movies set in Madrid, while the eye-popping Carrion building brings a modern aesthetic to classic Spanish style. 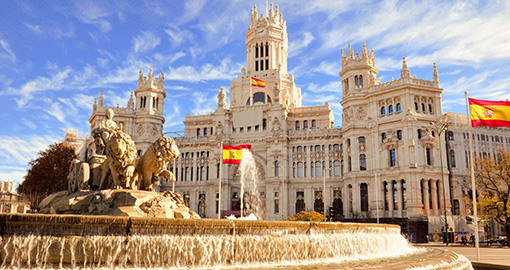 Completing Madrid’s ‘Golden Triangle of Art,’ this eclectic collection of European art spans the 13th to the 20th century. This 1,600-strong collection differs from the Prado or Reina Sofia collections in that it was once privately owned. German entrepreneur Heinrich Baron Thyssen-Bornemisza de Kaszon began the collection in 1920. After the Baron’s death in 1947, his family continued to expand it, before being persuaded to relocate their artistic riches to Spain in the 1980s. The museum has been open to the public since 1992 and offers a little something to everyone’s taste. 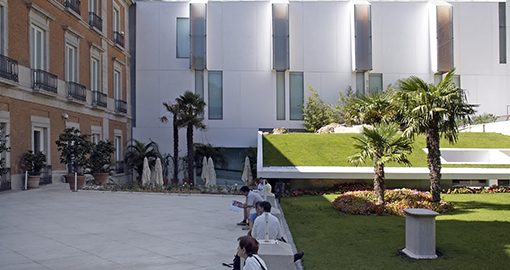 Gran Via and Surrounds

There’s perhaps no better street in the city to aimlessly wander than Gran Via. Explore the streets that inspired Almodovar among others, weaving your way between busy, yet stylish locals, ducking in and out of Madrid’s most fashionable stores. Don’t neglect the side streets, and feel free to veer off as the mood takes you into trendy city districts like Chueca, one of the world’s largest and busiest LGBTQ neighbourhoods. 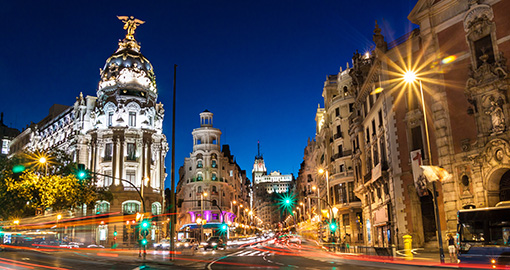 What’s an ancient Egyptian temple doing a stone’s throw from Madrid’s Royal Palace? The 2200-year-old Temple of Debod was rescued in 1960 from a watery fate at the bottom of the Nile, as construction swiftly progressed on the Aswan High Dam. When Spain assisted in the relocation of the mighty Abu Simbel temples, it was gifted the Temple of Debod in thanks. The temple has stood in its present location, enjoyed by visitors to Madrid since 1972, and is the only Egyptian temple of its kind to be seen in Spain. 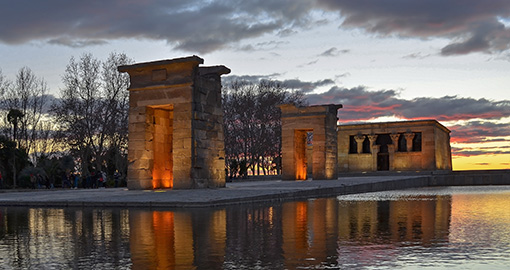 Spain uses the Euro and is generally a solidly mid-priced destination. Madrid is also usually spared the wild price fluctuations (and crowds!) that put high season pressure on Barcelona. The most popular museums and attractions are very reasonably priced. Some are even free at times. Pop into the Prado during the last two hours of the day if a quick visit will suffice. You can order up a good, inexpensive meal for 11 EUR, and while tapas plates can add up fast, a good sit-down meal for two with wine, beer or sangria is extremely reasonable at around 40 EUR. Alcoholic drinks can vary wildly throughout the city. A local brew in a regular bar shouldn’t set you back much more than 3 EUR but can run much higher in trendy nightlife areas. Madrid’s party scene is legendary, but if you hope to partake, be on the lookout for young people handing out flyers and cards on the street. These are your keys to avoiding cover charges and in some cases queues for popular venues and parties.

Spanish dining tradition is as prevalent in Madrid as it is anywhere. Lunch is likely to be a leisurely affair through the early afternoon, and don’t count on eating dinner before 9 pm. It’s not unusual for bars to serve a sizeable after-work crowd before the local restaurants begin service. Club-goers shouldn’t plan on much happening before 1 am. Madrilenos can seem a little brusque, even unwelcoming at first, at least by Spanish standards. This is the country’s business centre and it rarely slows down for tourists, particularly ones who don’t speak Spanish. The locals are also fiercely proud of their city, and so want you to leave with a good impression. Don’t hesitate to ask someone if you need directions or help.

Madrid is pretty easy for non-Spanish speakers to navigate, with a wealth of tours and experiences conducted in English. Most hospitality staff will also have no trouble understanding you. However, this is a hugely influential city that attracts visitors from all over the Spanish-speaking world. You may find locals reluctant to speak English if they don’t have to. If you want to open up what the ‘real’ Madrid (no pun intended) has to offer, brush up on at least basic Spanish.