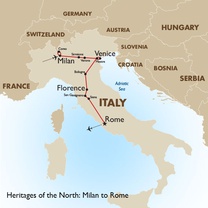 Some say Italy has it all, which could be true. It has beautiful scenery ranging from its scenic coastal areas to its colourful mountain ranges. It has a vast wealth of culture, architecture and ancient sites. It has modern cities that embody contemporary Italy, and don’t forget Italy’s gifts to the world's taste buds, its wonderful cuisine and wines.

Italy is, for the most part, a peninsula situated on the Mediterranean Sea, bordering France, Switzerland, Austria, and Slovenia in the north. The boot-shaped country is surrounded by the Ligurian and the Tyrrhenian Seas to the west, the Mediterranean and Ionian Seas to the South and the Adriatic Sea to the East. The landscape is diverse but can be primarily described as mountainous including the Alps and the Apennines mountain ranges which run through the vast majority of its landmass. Two major islands are part of this country: Sardinia, off the west coast of Italy in the Mediterranean Sea and Sicily, at the southern tip of the boot.

Starting with the eternal city of Rome, one can find ruined wonders of the Roman Empire and some of the world's best-known archaeological sites. However, Rome also provides all the amenities of an International, world-class city. Florence, sometimes known as the Cradle of the Renaissance, is Tuscany's top attraction but the nearby hill towns of Siena, Pisa and Lucca all have much to offer the visitor. Next door is Umbria, dotted with many picturesque towns such as Perugia, Orvieto, Gubbio and Assisi. Everyone knows the canals of romantic Venice, and a visit here will never disappoint. For “Foodies”, there are the gastronomic delights of Bologna.

In the northern Italian Alps is the impressive mountain range of the Dolomites with first-class ski resorts such as Bolzano and Cortina d'Ampezzo. In the northern part of Italy are several delightful cities such as Parma and Verona. They offer not only true Italian character but also history and culture. The South Tyrol and the cosmopolitan city of Trieste offer a uniquely Central European flair. Turin is a world-class city and the industrial capital of Italy. The country’s largest port is Genoa on the Mediterranean Sea. Milan is the main business centre but also offers other attractions such as its Cathedral and excellent shopping. Also setting Italy apart are its beautiful and scenic lakes, all located in the north of the country. Lake Como, Lake Garda, Lake Lugano (shared with Switzerland) and Lake Maggiore (also shared with Switzerland) are the principal ones. Naples is a cosmopolitan city with grit and character to spare, not to mention being the birthplace of pizza. Close by are the dramatic ruins of Pompeii, the volcanic Mount Vesuvius, the romantic Amalfi Coast and the stunning islands of Capri and Ischia.

Italian food Italy is truly one of the most diverse in the world, and in any region, city, or village you visit, you will find different specialties. Italian cuisine, contrary to popular belief, is not just based on pasta and tomato. In some parts of Northern Italy, pasta is rarely eaten. Rice, potatoes, lentils, soups and similar meals are very common in some parts of the country. Like the language and culture, food in Italy differs region by region. We cannot ignore Italian wine which is exported all over the World. Names such as Barolo, Brunello and Chianti are very well-known.

At Goway we believe that a well-informed traveller is a safer traveller. With this in mind, we have compiled an easy-to-navigate travel information section dedicated to Italy.

Learn about the history and culture of Italy, the must-try food and drink, and what to pack in your suitcase. Read about Italy's nature and wildlife, weather and geography, along with 'Country Quickfacts' compiled by our travel experts. Our globetrotting tips, as well as our visa and health information, will help ensure you're properly prepared for a safe and enjoyable trip. The only way you could possibly learn more is by embarking on your journey and discovering Italy for yourself. Start exploring...book your Italy vacation today!

Consider an additional stopover to your Italy vacation at one of Goway's other European destinations. You can choose from a Paris vacation, a London vacation or an Amsterdam vacation, en route to or from Italy.