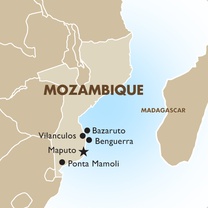 Mozambique is located in the southeastern part of the African continent. Covering an area of 801,590 square kilometres, it shares borders with Tanzania, Zambia and Malawi to the north, Zimbabwe to the west, and Swaziland and South Africa to the south. The eastern coastline, characterised by beaches, coral reef and mangrove swamps faces the Mozambique Channel (part of the Indian Ocean) and stretches for 2,500 km. Mozambique is divided into ten provinces: Maputo (the capital), Gaza, Inhambane, Sofala, Manica, Zambezia, Nampula, Tete, Niassa and Cabo Delgado.

The coast is relatively low and swampy and the shallow reefs are considered to be some of the best in the world for diving. The Bazaruto Archipelago is a chain of four main islands: Bazaruto Island, Benguerra Island, Magaruaque Island and Santa Carolina as well as two smaller islands, Banque and Shell. The archipelago became a National Park in 1971 and all wildlife live free in this conservation area. The Quirimbas Archipelago is north of Mozambique and is made up of twelve major islands and around twenty coralline outcrops. Originally a fishing village, today, many of the islands are uninhabited.

The central and southern parts of the country are made up of higher plains and plateaus while mountains in the west and north make up around 5% of the total land area. Mountains in these areas range from 600-2,400 m (2,000-8,000 ft) in elevation and the main peaks include Alto Niasa, Alta Zambézia and Algonia. The highest mountain in the country is Mount Binga at 2,436 m (7,992 ft).

Several large rivers run throughout the country including the Zambezi, Limpopo, Save and Lugenda Rivers. There are also three additional lakes: Lake Niassa (or Malawi), Lake Chiuta and Lake Shirwa, all of which are found in the northern part of the country.

At Goway we believe that a well-informed traveller is a safer traveller. With this in mind, we have compiled an easy to navigate travel information section dedicated to Mozambique.

Learn about the history and culture of Mozambique, the must-try food and drink, and what to pack in your suitcase. Read about Mozambique's nature and wildlife, weather and geography, along with 'Country Quickfacts' compiled by our travel experts. Our globetrotting tips, as well as our visa and health information will help ensure you're properly prepared for a safe and enjoyable trip. The only way you could possibly learn more is by embarking on your journey and discovering Mozambique for yourself. Start exploring… book one of our Mozambique vacations today!

After your Mozambique tour, why not consider one of Goway's Europe tours.

Book your Mozambique vacation with Goway!

AfricaExperts is the exclusive division of Goway that specializes in planning and organizing Mozambique vacations and experiences. Choose from a romantic island stay, a stay of distinction, a rail journey, a independent travel module and more. We want to be your first choice when next you go globetrotting to Mozambique.