MODERATE | SELF DRIVE: Music plays a large part in this itinerary, with Memphis and Nashville proudly displaying their Rock’n’roll, Blues and Country chops. Plus, a chance to see two of the world’s famous recording studios in Memphis and Muscle Shoals. Lest we forget, there’s Graceland and Tupelo, famous home, and original birthplace of Elvis, respectively. If rockets are more your thing, the largest space museum in the world in Huntsville is a must-see, while Lynchburg, Tennessee is synonymous with the Jack Daniels distillery. Start and finish your trip in lively Atlanta, a modern metropolis, rich in history. 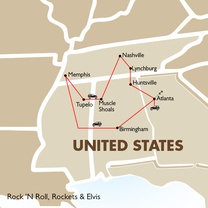 This 13-day trip hands you the keys as you embark on a whirlwind tour tracing the baselines of rock, blues, and country to Atlanta, Memphis, and Nashville with plenty of stops in between. Rock ‘n’ roll heaven awaits you in Muscle Shoals as do the shining rockets of Huntsville and rich histories of Birmingham and Atlanta, moving to your own rhythm as you travel into the heart of the American South.

Birmingham is a city most often associated with the Civil Rights Movement, as the location for a turning point in the fight for racial justice and nameplace of Martin Luther King Jr.’s famous “Letter From a Birmingham Jail.” Learn more about the fight for equality at the Birmingham Civil Rights Institute, and afterwards take a moment for quiet reflection at a number of lookout points from mountains that surround the city, nestled in the foothills of the Appalachians.

Dive deep into the birthplace of blues and rock in Memphis, famous for the musical notes and lively entertainment that floats down Beale Street. The iconic area has roots as a hub of black culture and commerce, attracting many musicians to its music halls, theatres, and bars. Across the city, you’ll find Graceland, home and resting place to Elvis Presley, and a number of museums and musical attractions like the Rock & Soul Museum that explore the city’s melodic history.

Fans of “The King” will love a stop in Tupelo, childhood home of Elvis Presley where you can see his humble beginnings and visit the 15-acre Elvis Presley Park. Carry hot on the heels of American rock in Muscle Shoals, the “Hit Recording Capital of the World”, where you can see the legendary Fame Recording Studio, where artists like Aretha Franklin, Etta James, and Clarence Carter once recorded. You can also visit the birthplace and museum of “The Father of the Blues”, AKA W.C Handy, one of America’s most influential songwriters.

Incorporate more strings into your sound as you journey into Nashville, the beating heart of country music. With options to visit the Country Music Hall of Fame, RCA Studio B, and the Grand Ole Opry, you’ll quickly see why the area is also referred to as “Music City”. The Tennessee State Museum will give you a new perspective on Southern history, from its Revolutionary Roots to the Civil War and Reconstruction. A quintessential stop before leaving the state awaits you in Lynchburg, home to the Jack Daniels Distillery, where every single drop of the iconic whiskey is made.

Blast off in Huntsville at the U.S State & Rocket Centre, which boasts “Earth’s largest space museum” with thousands of space artifacts and out of this world displays that kids and adults alike will marvel at. It is also home to Space Camp, a fully immersive celestial experience that has trained seven astronauts and over one million space enthusiasts on space exploration, robots, and aviation.

Your final stop brings you back to Atlanta, where you’ll finally be able to explore its eclectic museums, from the World of Coca-Cola to the Georgia Aquarium. A tour of the National Centre for Civil & Human Rights is a necessity, recounting the struggles of the US Civil Rights Movement and contextualizing it in the world today. Atlanta is also home to a thriving art scene, with collections popping up everywhere from galleries to sidewalks to warehouses. At the end of your stay, return your car to the airport unless you’d like to extend your tour of the American South.

Arrive at Hartsfield-Jackson Atlanta Airport and travel onto Birmingham, Alabama. Depending on your time of arrival you might want to see the Barber Vintage Motorsport Museum, home to the world's largest motorcycle collection. The museum has over 1,200 vintage and modern motorcycles and race cars. Alternatively, you can spend some time in the entertainment district in downtown Birmingham.

On Sunday morning you have a great opportunity to hear a spirit filled Gospel Choir at the historic 16th Street Baptist Church, nominated as a World Heritage Site. The church is in the Civil Right District of Birmingham, adjacent to the Birmingham Civil Rights Institute and a must-stop for those that want to learn more about Southern history and Dr. Martin Luther King, Jr.

Today drive on to enjoy the musical city of Memphis and explore the birthplace of the blues by taking in a performance in one of the entertaining Beale Street blues bars. Memphis offers a multitude of musical and movie moments, and you have two nights to explore your favorites. Perhaps, start with a visit to Graceland, home of the late Elvis Presley, then choose between the Rock & Soul Museum, the Stax Museum of American Soul Music, the Gibson Guitar Factory, or Sun Studio where musicians such as B.B. King, Elvis Presley, Jerry Lee Lewis, Johnny Cash and Roy Orbison recorded their early hits.

You have more time today to see some of the things you were unable to catch yesterday. Alternatively, leave the musical pursuits until the evening and just stroll around town. You might see the statue of Memphis Belle, a monument to Margaret the wife of the original bomber pilot, which was sculpted by Andrea Lugar who also created the bronze Elvis Presley on Beale Street. Or take the monorail that connects the city center of Memphis with the entertainment park on Mud Island.

Today travel onto Tupelo, Mississippi to see the modest birthplace of Elvis. The most significant landmark of Tupelo's modern history is a simple, two-room house where the King of Rock & Roll was born on January 8, 1935. From this humble beginning, Elvis Presley began his swift rise to become the world's most popular entertainer. The house, built by his father with $180, draws over 50,000 visitors each year from across the world and is part of the 15-acre Elvis Presley Park. The home is a Mississippi landmark and the centerpiece of the park which includes, among many other exhibits, the popular photo-op "Elvis at 13" statue and Elvis' childhood church.  Later in the day continue onto Muscle Shoals for your overnight stop.

Keith Richards, guitarist with the Rolling Stones, who does not really need an introduction, called it "Rock-N-Roll Heaven".  It still carries the moniker of ‘Hit Record Capital of the World’, and you should visit historic FAME Muscle Shoals Sound Studio, drop in at the Rattlesnake Saloon, and then see ‘The Father of the Blues’, W. C. Handy's birthplace and museum.

Your next stop is Nashville, another music city of great renown where you can tour Music Row and visit historic RCA Studio B and Country Music Hall of Fame. Looking for nighttime entertainment, visit some of the intimate clubs in town including The Listening Room Cafe and the famous Bluebird Cafe.

You have more time in Nashville today to soak up the sounds in the country music capital. Visiting the world-famous Grand Ole Opry and Opryland U.S.A should be on your menu but, alternatively, you can experience the South's tumultuous history at the Tennessee State Museum or check out the famous Printer's Alley.

Today’s drive will take you to Lynchburg Tennessee where small-town values and perfect Americana living are alive and well. It might be small, but it's home to one LARGE industry - the Jack Daniels Distillery - which is the oldest registered distillery in the United States and averages over 250,000 visitors every year. Every ounce of Jack Daniels Tennessee Whiskey is produced here, fed by the pure, iron free cave water springs nearby.

Spend the day In Huntsville to see the largest space museum in the world, the U.S. Space & Rocket Center. The museum has one of the most extensive collections of space artifacts and displays more than 1,500 rockets, engines, spacecraft, simulators, and hands-on exhibits. It is also home to Space Camp.

Today you are headed for Atlanta, your stop for the last two nights of this trip.  While in the South's gateway city, take the opportunity to visit the home of the world's largest aquarium, the Georgia Aquarium, and the World of Coca-Cola.

Atlanta started as a railroad junction in the 1830s and quickly became the transport hub of the South. Its strategic importance was a large part of the reason it made such an inviting target for General Sherman's Union Army, which razed it during the Civil War. Consider visiting Fairlie-Poplar, the African American Panoramic Experience, Grant Park, or the Atlanta History Center.

Return to Hartsfield-Jackson Atlanta Airport for your flight home unless you plan to extend your stay in the area.