Australia's ANZAC Day - the Birth of a Nation

ANZAC Day in essence commemorates the moment of birth of the nationhood of both Australia and New Zealand. On the 25th of April 1915, ANZAC troops landed on the beaches of Gallipoli Turkey in one of the biggest disasters in military history. The actions of the ANZAC troops during the campaign bequeathed an intangible but powerful legacy.

The Australian and New Zealand Army Corps (ANZAC) was a First World War army corps of the Mediterranean Expeditionary Force that was formed in Egypt in 1915 and operated during the Battle of Gallipoli. General William Birdwood commanded the corps, which comprised troops from the First Australian Imperial Force and 1st New Zealand Expeditionary Force. The corps was disbanded in 1916 following the Allied evacuation of the Gallipoli peninsula and the formation of the I Anzac Corps and II Anzac Corps.

The Anzac spirit or Anzac legend is a concept which suggests that Australian and New Zealand soldiers possess shared characteristics, specifically the qualities those soldiers allegedly exemplified on the battlefields of World War I. These qualities cluster around several ideas, including endurance, courage, ingenuity, good humour, larrikinism, and mateship. According to this concept, the soldiers are perceived to have been innocent and fit, stoical and laconic, irreverent in the face of authority, naturally egalitarian and disdainful of British class differences. 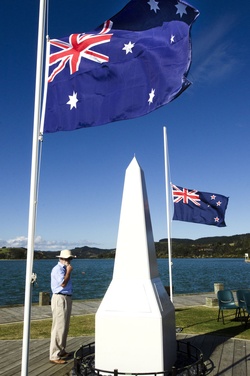 The Anzac spirit also tends to capture the idea of an Australian and New Zealand "national character", with the Gallipoli Campaign often described as the moment of birth of the nationhood both of Australia and of New Zealand.

Anzac Day is a national public holiday and is considered by many Australians to be one of the most solemn days of the year. Marches by veterans from all past wars, as well as current serving members of the Australian Defence Force and Reserves, with allied veterans as well as the Australian Defence Force Cadets and Australian Air League and supported by members ofScouts Australia, Guides Australia, and other uniformed service groups, are held in cities and towns nationwide. The Anzac Day March from each state capital is televised live with commentary. These events are generally followed by social gatherings of veterans, hosted either in a public house or in an RSL club, often including a traditional Australian gambling game called two-up, which was an extremely popular pastime with ANZAC soldiers. In most Australian states and territories, gambling is forbidden outside of licensed venues. However, due to the significance of this tradition, two-up is legal only on Anzac Day.

Two-up is a traditional Australian gambling game, involving a designated "spinner" throwing two coins or pennies into the air. Players gamble on whether the coins will fall with both heads (obverse) up, both tails (reverse) up, or with one coin a head, and one a tail (known as "odds"). It is traditionally played on Anzac Day in pubs and clubs throughout Australia, in part to mark a shared experience with diggers through the ages.

It has been claimed the biscuits were sent by wives to soldiers abroad because the ingredients do not spoil easily and the biscuits kept well during naval transportation. Today, Anzac biscuits are manufactured commercially for retail sale.

Notably, Anzac biscuit recipes omit eggs because of the scarcity of eggs during the war (after most poultry farmers joined the war effort) and so that the biscuits would not spoil when shipped long distances.

The recipe for ANZAC biscuits is shown on goway.com under trivia on the Travel Information site for Australia.

The movie Gallipoli, starring a very young Mel Gibson, is the movie that portrays well the qualities mentioned above under ANZAC Spirit. The extras are also well worth watching. In the movie a lot of “strine” is spoken so you might want to consult Goway’s Downunder Dictionary.

At Goway we believe that a well-informed traveller is a safer traveller. With this in mind, we have compiled an easy to navigate travel information section dedicated to Australia.

Learn about the history and culture of Australia, the must-try food and drink, and what to pack in your suitcase. Read about Australia's nature and wildlife, weather and geography, along with 'Country Quickfacts' compiled by our travel experts. Our globetrotting tips, as well as our visa and health information will help ensure you're properly prepared for a safe and enjoyable trip. The only way you could possibly learn more is by embarking on your journey and discovering Australia for yourself. Start exploring...book one of our Australia vacations today!

Book your Australia tour with Goway!

With more than 250 Australia tours and experiences, Goway’s Downunder wizards can offer you many ways to explore, and enjoy Australia. Choose from a simple city stopover, see the country highlights on one of our classic itineraries,  enjoy an Island stay, a self drive holiday, a Holiday of a Lifetime and more. We want to be your first choice when next you go globetrotting.