Before setting off on an Australia vacation, learn something about the country's background and history. Is it an island or a continent? Australia is the sixth-largest landmass in the world, supporting endless diversity across its six states and two territories. One can explore tropical rainforests, red deserts, coral reefs, snow-clad mountains, wetlands, wine regions, national parks, bushland, and so much more. That's not to discount Australia's equally diverse and culture-rich cities.

Why should I travel to Australia?

The list of reasons for visiting Australia is endless, whether you're looking to stretch out on its beaches, see its unique nature and wildlife (think of indigenous animals such as kangaroos, koalas, wallabies, wombats, Tasmanian devils, kookaburras and emus), abundant sports including surfing, scuba diving, and snorkelling, delicious food and wine (including the world's best Shiraz), and cultural attractions.

What are the best places to visit in Australia?

It's difficult to do Australia justice in just one trip, and almost impossible to rank its attractions and cities, but here are some top picks for your shortlist.

Sydney: Your Welcome to Australia

The country’s largest city is known as “The Harbour City” due to it being mainly built around Sydney Harbour. It has been recognized as one of the world’s most beautiful metropolises, dominated by the striking Sydney Harbour Bridge (also known as the “Coat Hanger”) and the Sydney Opera House with its sail-shaped design. Sydney also boasts a number of sandy surf beaches within easy reach of its centre, including Bondi and Manly. A harbour cruise takes in not only the skyline of Sydney but also the attractive nearby suburbs spread out around the harbour. The city boasts several very beautiful and scenic parks including the Royal Botanical Gardens in the shadow of Government House. Nearby, you'll find the Art gallery of New South Wales, the Museum of Sydney, and the Australian Museum. Take a stroll around the historic Rocks neighbourhood with its Art Deco buildings, or Paddington with its grand Victorian homes and lively café and restaurant scene,

What are the best day trips from Sydney?

Two hours west of the city, the Blue Mountains offer remarkable scenery and are a UNESCO World Heritage site. The dramatic scenery encompasses steep cliffs, eucalyptus forests, waterfalls, and small villages. The mountains include the Three Sisters, a trio of awe-inspiring rocky pinnacles. There are 140 kilometres/75 miles of walking trails as well as a cable railway purported to be the steepest anywhere. Katoomba, a small town offering arty boutique shops makes a base for staying overnight. Another region not far from Sydney is the Hunter Valley, a wine-producing region with over 120 wineries. The Hunter Valley Gardens are also popular, with 25 acres of colourful flowers. 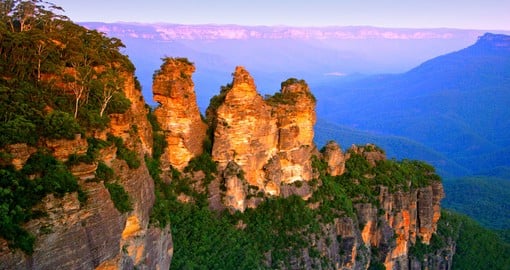 Forever Sydney's friendly rival, Melbourne adds a touch of sophistication to your Australia vacation. It is the most European of Australia’s cities and is the country's cultural capital. Its unique character is defined by its trams (streetcars) and its Victorian-era architecture, plus excellent shopping and cultural sites such as art galleries and museums. It offers colourful neighbourhoods such as Fitzroy and St Kilda, the latter a beach resort as well as a trendy suburb. Melbourne is also a great base for day trips, either to Phillip Island to watch the Little Penguin Parade at sunset, or the scenic Great Ocean Road to take in views of the Twelve Apostles.

Adelaide is an easy-going, relaxed city in love with gardens and good wine. It's also something of a theatre and cabaret hub, hosting a biannual Arts Festival, and the world's largest cabaret festival. It's also a wonderful centre from which to visit the Barossa Valley and McLaren Vale wine districts. Nearby Kangaroo Island offers an abundance of wildlife to see along with some unique landscapes, but can be a rushed day trip, so stay overnight if possible. If you're pressed for time, Cleland Conservation Park offers another way to get up close to many of the country’s native animals.

Canberra, the serene unhurried and purpose-built and planned capital, is located around the attractive artificial Lake Burley Griffin. Some of the major landmarks are its unmistakable Parliament House, the Old Parliament Building, and the Australian War Memorial. Canberra also has several of Australia's top art galleries and museums.

Brisbane: Welcome to the Sunshine State

Brisbane is Australia’s third-largest city and is known as the “City of Sunny Days” due to its sub-tropical climate. The Brisbane River defines the city's charm and character. A major attraction is the nearby Lone Pine Koala Sanctuary, the world’s largest, and one of the few places in the world you can legally hold one of these animals.

Not far from Brisbane are two excellent beach destinations. The Gold Coast offers 30 beaches including world-renowned Surfers Paradise. The Sunshine Coast has 70 kilometres/ 44 miles of uncrowded white-sand beaches to enjoy. Both are close to lush hinterland, with scenic national parks, mountains, waterfalls, and rainforests.

Perth: Get Out There to Western Australia

Perth might be out of your way, but it's worth the trip! Australia’s fourth-largest city. It is not only laid-back but also culturally diverse with attractive, uncrowded beaches and gardens. King’s Park is a landmark larger than New York's Central Park and encompasses an excellent botanical garden. From Perth, one can visit the wine country of Western Australia in the Swan Valley, and in the Margaret River region.

Darwin and the Top End

Darwin, in the north of the country, is small yet cosmopolitan, thanks to many different cultures that have come to call it home over the years. Besides its own fascinating history, particularly for World War Two buffs, it's a handy base for visiting both Charles Darwin National Park, one of Australia’s largest wetlands, and Kakadu National Park, the country’s largest national park with crocodiles, unique birdlife and the world's largest collection of Aboriginal rock art. Try a short boat cruise there to see everything.

Cairns: Gateway to the Great Barrier Reef and the Daintree

Cairns in Northern Queensland is the northern gateway to the Great Barrier Reef and is an essential addition for any Australian first-timer. It is also surrounded by rainforest and the scenic rail trip to the town of Kuranda is another must-do.  A little further north, you'll find the world's oldest living rainforest, the beautiful Daintree.

How Do I Take A Great Barrier Reef Tour?

Australia's Great Barrier Reef is located on the east coast. It is 2300 kilometres/1400 miles in length with a colourful underwater kingdom containing 1500 species of tropical fish alone. It is the largest coral reef formation in the world offering a spectacular array of marine life. You can reach many parts of the reef from Cairns or nearby Port Douglas. However, further to the south lie the Whitsundays, a group of islands that includes Hayman, Hamilton and Whitehaven Islands. An excellent, less crowded way to see lesser-known parts of the Great Barrier Reef is to take a short cruise from the Whitsundays. 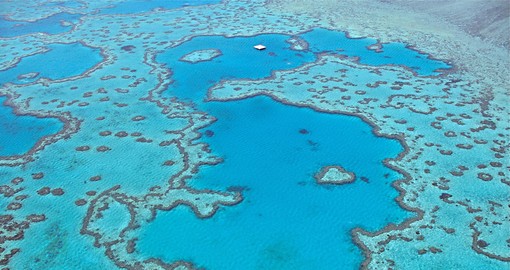 The Australian Outback is a vast area made up of either semi-arid or desert land. A great place to start exploring is in Alice Springs, and it`s the perfect place to explore the “Red Centre." It is also the home of the Royal Flying Doctor Service. Activities here can include camel rides from one of the many camel farms, stargazing under the clear desert skies, and hot air ballooning. One can visit the nearby King’s Canyon and the MacDonnell Ranges. 450 kilometres/270 miles away is Uluru or Ayers Rock, the huge sandstone monolith which rises 348 metres/1142 feet above the surrounding desert. To the local Anangu people, it is a sacred site, and climbing is now forbidden. One of the interesting features of the rock is the change in colour as the day progresses. Nearby, you'll find Kata Tjuta, also known as The Olgas. Said in the Aboriginal legend to be the eggs of the Rainbow Serpent that first created the world, these domes are in fact the eroded remains of another monolith that was once larger than Uluru.

Add a Cheeky Tour of Tasmania

Tasmania is an incredibly scenic destination with many rugged mountains and wilderness areas, It is in fact, the most mountainous state in Australia. Jagged peaks rise above dense forests and misty lakes in areas like Cradle Mountain. Tasmania's capital, Hobart is a pretty, arts-loving city with a vibrant waterfront and harbour built on reclaimed land. It is also associated historically with the convict era, as depicted at the Port Arthur Historic Site, an ex-penal colony. A short ferry ride up the Derwent River lies the cutting-edge Museum of Old and New Art.

There is so much more to enjoy and experience in this magical land. The biggest decision is choosing where to visit in the time available. Our Best Time to Visit Australia page will also help you decide when to travel.

Travel to Australia from the USA

Continental North America's closest major international airport to Australia is Los Angeles (LAX). Whether you are flying into Brisbane, Sydney or Melbourne the flight time for nonstop flights ranges between 13hrs to 16hrs.

San Francisco (SFO) is another popular gateway with a similar flight duration. There are also nonstop flights to Sydney from Houston (IAH) and Dallas (DFW).

Travel to Australia from Canada

The only nonstop flights to Australia fly out of Vancouver International (YVR). Other popular routes connect through the USA.

For some additional reading, the following articles are from our blog “Globetrotting with Goway,”.a great source of information for any kind of globetrotter.

Visiting the Icons of OZ on An Australia Vacation (Part 1)

Visiting the Icons of OZ on An Australia Vacation (Part 2)

Top 10 Things to Do in Melbourne, Australia

Top 5 Places to Visit in Australia This Summer

Top 10 Things to Do in Sydney, Australia

Swimming With the Fishes in Australia

7 Great Reasons to Take Your Kids to Australia This Summer

2 Myths About Travel to Australia

Travel Through the Australian Outback By Train

At Goway we believe that a well-informed traveller is a safer traveller. With this in mind, we have compiled an easy-to-navigate travel information section dedicated to Australia vacations.

Learn about the history and culture of Australia, the must-try food and drink, and what to pack in your suitcase. Read about Australia's nature and wildlife, weather and geography, along with 'Country Quickfacts' compiled by our travel experts. Our globetrotting tips, as well as our visa and health information, will help ensure you're properly prepared for a safe and enjoyable trip. The only way you could possibly learn more is by embarking on your journey and discovering Australia for yourself. Start exploring. Book one of our Australia tours today!

MODERATE | TAILOR-MADE: Explore Australia's most diverse cities and natural wonders on this journey that takes you to Sydney’s Opera House and spectacular Ayers Rock. Visit colourful Melbourne, snorkel the Great Barrier Reef, and learn about the traditional Aboriginal “Dreamtime."