Why You Should Visit Merida, Mexico

When you think of the Yucatan Peninsula, visions of beachside resorts and suntanning tourists immediately come to mind. But there’s much more to this Mexican peninsula than the beach, even if that’s part of its undeniable appeal. In particular, you should pay attention to Merida, the capital of the state of Yucatan and one of Mexico’s most beautiful cities.

Not only is it a great base for exploring the Maya ruins that make the peninsula so famous, but it’s an enviable destination in its own right.

Merida is the capital of Yucatan

Most people across Canada and the United States are familiar with the Yucatan and many people head there for beach getaways. But most people miss out on Merida, making it something of a jewel hiding in plain sight.

It doesn’t take long to be swept up in the beauty of the city. The Spanish founded Merida in 1542 on the ruins of the old Maya city of T’ho. They even used the original Maya stone as the foundation for many buildings. In place of the Maya buildings, they constructed whitewashed mansions in the old walled town. Over the years, these buildings were painted with bright colours, creating the vibrant look that exists to this day. However, Merida is still nicknamed ciudad blanca (white city) in reference to the colonial buildings’ original palette.

Of its population of just under one million, almost 60 percent have some Maya heritage, making Merida the city with the largest Indigenous population in Mexico. This contributes to the city’s palpable sense of history and proud heritage. In fact, Merida is considered the cultural capital of the peninsula and attracts travellers who have more on their mind than beachside idylls. You can spend your days exploring the city proper. Shop in the markets, dine in local restaurants, and enjoy the lively nightlife. Spend afternoons relaxing in large plazas, strolling down narrow streets, or exploring history in one of the museums.

Merida easily accommodates both cultural exploration and beachside relaxation. The city lies only 35km from the Gulf of Mexico, which means it’s a short drive from the city to the beach. It’s the perfect base for an exploration of the peninsula and its many pleasures, whether colonial avenues, Maya ruins, or world-famous beaches.

What are the top things to do in Merida, Mexico?

Hang out in Plaza Grande

Plaza Grande is the main square in Merida and its unofficial centrepiece. It has a significant amount of greenery and sitting space, making it ideal for hanging out in an afternoon. Historical landmarks like the cathedral lie right next to it, making it a good starting point for a walking tour. The park also has a large sign of the city’s name done up in bright colours, which is like catnip to Instagrammers. 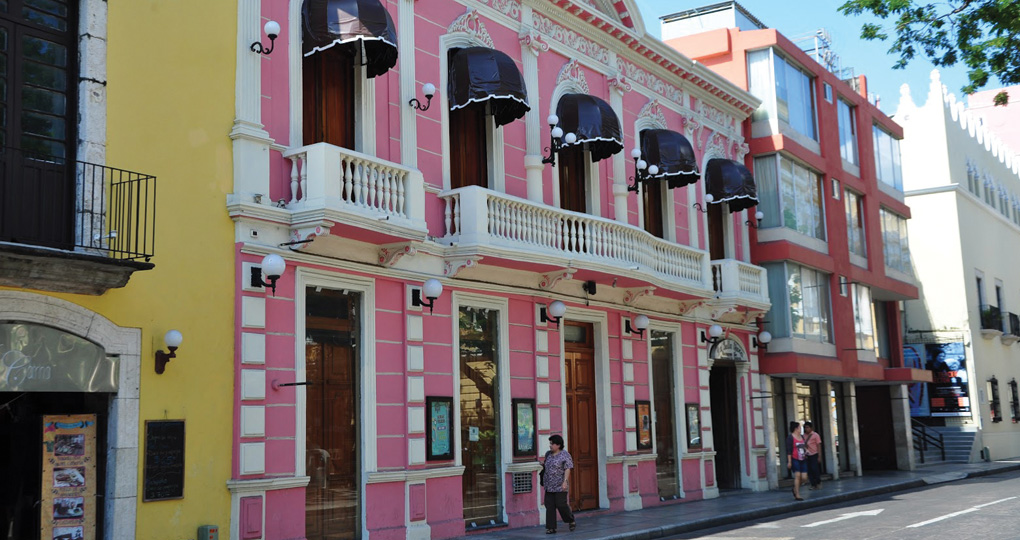 Also known as the Catedral de San Ildefonso, Merida Cathedral was constructed in the late 1500s, not long after the Spanish foundation of the city. It’s a relic of early colonial architecture and was built on the foundation of an ancient Maya temple. There’s an English-speaking tour of the cathedral every Saturday at 10am. On Sunday, you can attend an English-speaking service at 9am if you’re interested in the religious tradition.

This 16th-century home is among the most popular buildings in the city and sits on the south side of Plaza Grande. It was built to house soldiers, but in the 19th century, the Montejo family purchased it and transformed it into a mansion, with its distinct architecture and pink walls. Inside, you’ll find a museum displaying an exhibition of the building’s original furnishings.

Built in 2012, this gorgeous museum has a large exhibit on Maya history, with over 1,100 artifacts on permanent display. There are statues and headdresses discovered at archaeological sites such as Chichen Itza and Ek’ Balam. The entire building is fascinating in itself, as it’s designed like a sacred Maya tree known as a ceiba, which links heaven and the underworld in Maya mythology. You’ll find the museum around 12km north of the city centre, so you’ll likely have to hail a cab to get there.

Eat out and try Yucatan specialties

Merida has many good restaurants where you can try out some Yucatan specialties, many of which involve orange marinades. Be sure to try cochinita pibil, a slow-cooked pork marinated in orange, achiote, and spices, sopa de lima, which is a turkey soup seasoned with lime juice, and poc-chuc, which is thin-sliced pork marinated in lime juice. You should also consider trying queso relleno, which is Edam cheese stuffed with ground pork and covered in gravy, and huevos motulenos, a breakfast food that consists of tortillas, eggs, beans, cheese, and salsa covered with ham and peas.

This is the main market in Merida and a good place to shop for fresh fruits and vegetables. It dates back over 100 years and is a bustling place, so don’t expect it to be quiet when you visit. But it offers a glimpse of ordinary life in Merida. It’s also a good place to grab lunch.

Watch a game of Pok-ta-Pok

It’s a bit of a mystery how this Maya ball game was actually played, but historians think they’ve figured out the rudimentary rules of it, which involves a massive rubber ball and a stone hoop on a wall. You can watch folks play a recreation of it every Saturday night at 8:30pm in Calle 60 in front of the Plaza Grande. Don’t let the term “recreation” fool you: this is a physical game and the players really go for it. Come early to make sure you get a good spot near the action. 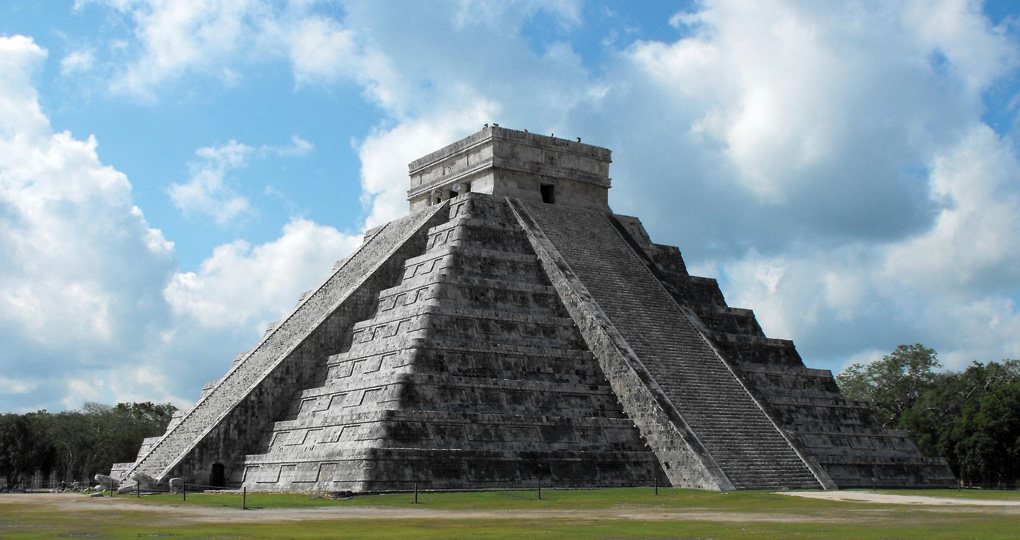 What is there to do around Merida?

Chichen Itza is about a 90 minute drive southeast of Merida, which makes it easily accessible on a day trip from the Yucatan capital. This site is the most famous of all the Maya archeological sites on the peninsula—and likely the world. In fact, many people go to the Yucatan specifically to see the Pyramid of Kukulcan, also known as El Castillo, so don’t pass up the opportunity to visit while you’re based in Merida.

Visit the Maya ruins of Dzibilchaltun

Head 17km north of Merida and you’ll reach the Maya ruins of Dzibilchaltun, which is a massive archaeological site. From 1500BC to the 1540s, Dzibilchaltun was an administrative centre. Archaeologists have mapped out at least 8,400 structures that existed here, which is staggering to think about. You can explore the ruins to learn about the Maya civilization, as well as the on-site museum which goes into detail about the archaeological process.

Explore the Maya ruins of Uxmal

Uxmal is not quite as well known as Chichen Itza, but some people consider these Maya ruins even better than their more popular cousins. Located around an hour southwest of Merida, Uxmal doesn’t have the same crowds as other Maya sites, since it’s not close to the beach. However, it does have an impressive series of ruins, including the 40m-high Pyramid of the Magician, which you can still climb, unlike the Pyramid of Kukulcan at Chichen Itza.

Soak in a cenote

A cenote is a natural limestone bedrock that pools with groundwater, and the Yucatan has plenty of them. Essentially, they’re natural swimming pools. Considering that the Yucatan gets very warm, you’ll want to take advantage of them. There are several popular cenotes near Merida, including San Antonio Mulix Cenotes and Cenote Xlacah near Dzibilchaltun.

Go swimming at Celestun or Progreso

It’d be a missed opportunity to visit the Yucatan and not spend at least a day at the beach. Luckily, there are several good ones near Merida. Progreso is a quiet fishing village around 50 minutes to the north of Merida. It has a white sand beach and several good restaurants known for their fresh seafood. Celestun is another beachside town, although it sits to the west of Merida, making it one of the few spots on the peninsula where you can watch the sunset over the water. The Celestun Biosphere Reserve has a mangrove lagoon that is known to attract flamingos, so wildlife lovers should take note.

MODERATE | SMALL GROUP: Let the remnants of the Mayan empire intrigue you on this short Yucatan Peninsula tour, which takes in the famous sights of Chichen Itza, Uxmal, Ekbalam, and Coba, before returning you to the sundrenched shores of Cancun.

Haciendas of the Yucatan

DELUXE | PRIVATE-GUIDED: Spend time in the Yucatan Peninsula to explore outstanding Mayan archaeological sites and get a glimpse of how this civilization lived. Of particular note are Uxmal and Chichen Itza, which you'll discover alongside a knowledgeable private guide. Along the way, relax in a range of top-notch haciendas.