Hawaii uses the United States Dollar (USD) as its currency. Exchanging money in Hawaii is very simple. You can use an ATM or use the currency exchange at the airport, a bank, or your hotel. It is helpful to have some US currency for taxis and other incidentals.

English is widely spoken in the Hawaiian Islands. Some islanders do speak Hawaiian, but they also speak English. Many islanders speak Hawaiian Pidgin or Hawaii Creole, with some of these words becoming the norm, such as: brah (brother), broke da mouth (delicious food), chicken skin (goosebumps), grindz (food or meal), and slippahs (flip-flops or sandals).

You can visit the Hawaiian Islands anytime during the year, but the best months to visit are April, May, September, and October. During these months there will be better weather, fewer people, and better rates. You also need to take into account what you want to do while you are in Hawaii, as there is a best time to go for surfers, hikers, whale watchers, turtle hunters, crowd avoiders, sun bathers, and so forth.

The Hawaiian Islands’ climate is mostly tropical due to the influence of the trade winds. The islands also have many microclimates. These include tropical rainforest, arid desert, temperate, and alpine. The Pacific Ocean and the trade winds help the Hawaiian Islands stay tropical, but without high temperatures. Summer averages 84°F/29°C with lows of 70°F/21°C and highs of 90°F/32°C. Winter averages 73°F/23°C with lows of 65°F/18°C and highs of 79°F/26° C.

The Hawaiian Islands have something for everyone. Oahu has a mix of different cultures, luxury shopping, history, and adventure. Maui offers relaxation, soft adventure, beaches that are seemingly endless, and spectacular scenery. The Big Island of Hawaii offers lots of adventure, history, great restaurants, and cafes for foodies and lots of nature to wander around in. Kauaii offers plenty of adventure and sports, quiet and relaxing areas and awesome restaurants. 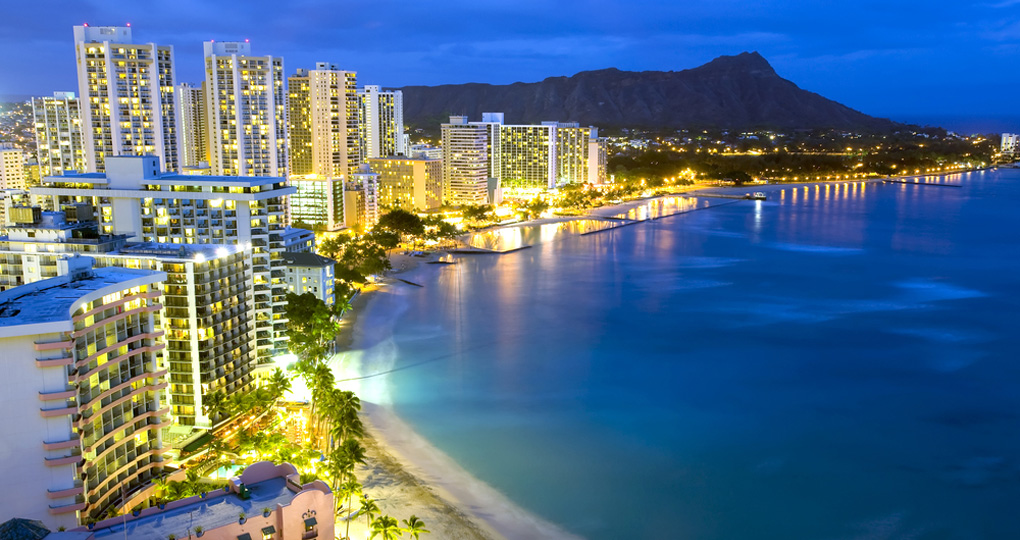 Most flights from the United States go through Los Angeles, San Francisco, Portland, Seattle, Denver, Chicago, or Phoenix to get to the Hawaiian Islands.

In Canada, most flights go through Vancouver, Calgary or Toronto. 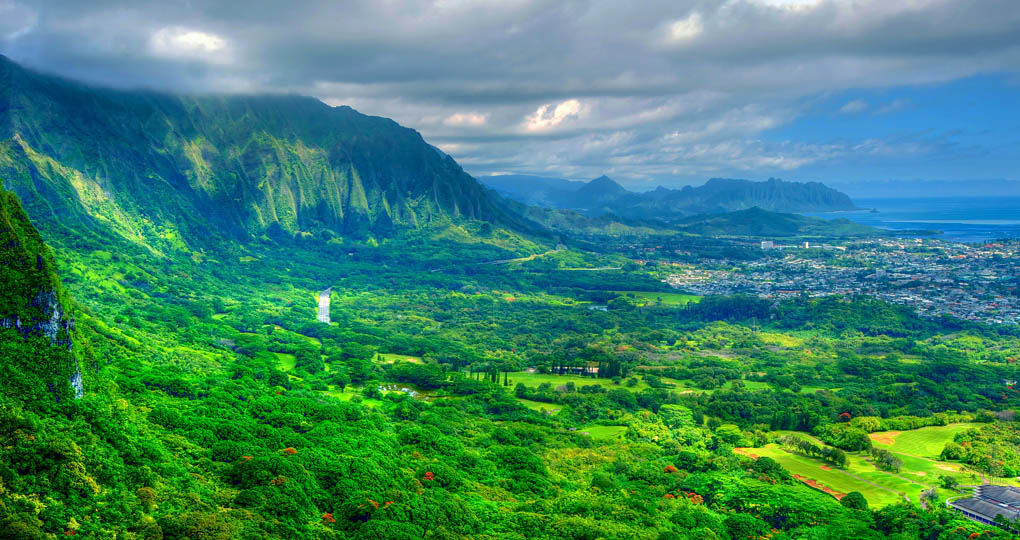 The gateway to the Hawaiian Islands, Oahu has something for everyone, from hiking to Manoa Falls to visiting Pearl Harbor to exploring the North Shore and Hanauma Bay.

Diamond Head State Monument is part of the Ko’oloau Range of Volcanoes. It stands 762ft/232.25m above sea level, overlooking Waikiki and Honolulu. Diamond Head is a great place to hike and take great photos.

The Preserve is a beautiful sheltered bay that is on the southeastern side of Oahu. It is a 30-minute drive from Waikiki. It’s home to some of the best snorkelling in the area.

Called the Valley Isle, Maui is the second largest of the Hawaiian Islands. You can see the sunrise from Haleakala, drive to Hana, or hang out on one of the world famous beaches.

Haleakala is the highest peak on Maui, at 10,023ft/3005m. Be sure to go to the peak at sunrise as it offers an amazing view. Then take a bike ride down the volcano and see vegetation and animals that are only found here.

Once a whaling village, Lahaina Town has grown up over time. Now it welcomes visitors from all over the world to see its air galleries, historic places, and eat at the world-renowned restaurants. It is one of the most historic towns on Maui.

Kauai, the Garden Island, is a lush tropical paradise. With the wild Na Pali Coast to Hanalei with its surfers, you can get a little of everything on Kauai.

Hanalei lies on the north coast of Kauai in the Bay of Hanalei. The village is the gateway to the Hanalei Valley and is surrounded by sugar cane and taro fields.

The Big Island of Hawaii

The Big Island of Hawaii is the largest of the Hawaiian Islands. It has volcanoes, craters with lakes in them, cliff-side waterfalls, black, white and green sand beaches, cowboys or paniolos, deserts and more.

A working cattle ranch on the Big Island, Parker Ranch covers 355square-miles. The ranch is operated by the sixth generation of the Parker family and is open to the public.

This bay is a great place to snorkel and many companies have excursions here. This is also where Captain Cook landed in 1779 and later died in a skirmish with native Hawaiians. The Captain James Cook Monument is here as is Hikiau Heiau, which is a temple built to honor the Hawaiian god Lono.

Other Highlights of Hawaii Off the Beaten Path 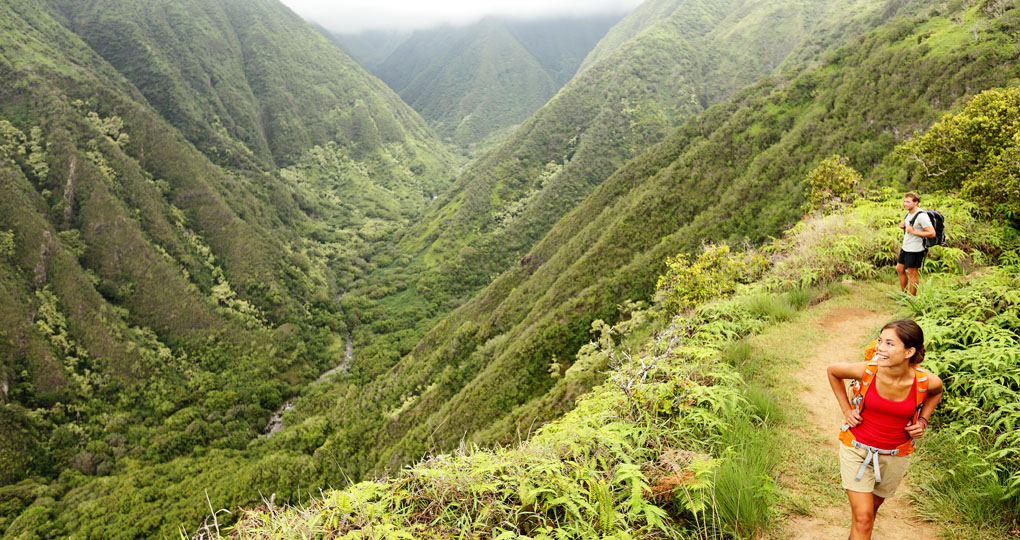 Located on the Big Island, Papakolea is remote, but you can visit it on a trip to see Hawaii Volcanoes National Park. The green sand comes from olivine crystals formed when Hawaiian lava cools. The erosion of the Puu Mahana cinder cone formed the beach.

Over the years, discarded glass from the ocean has washed up on the beach here. The jagged edges have been made smooth by the forces of the ocean, turning the glass into pebbles similar to sand. This is in the Eleele area of Kauai.

Keep going at the end of the road in Hana, Maui and you will get to the Seven Sacred Pools, a set of tiered pools fed by waterfalls. The idyllic scenery of the lush valley, the sparkling pools, and the plunging waterfalls makes this one of the most beautiful spots on Maui.

Located near Waikiki, visitors can hike through bamboo forests to reach Manoa Falls. The falls cascade 150ft down the mountainside. The falls have also been used as a filming location for many Hollywood movies and television shows, such as Jurassic Park and Lost.

Top Activities and Experiences in Hawaii 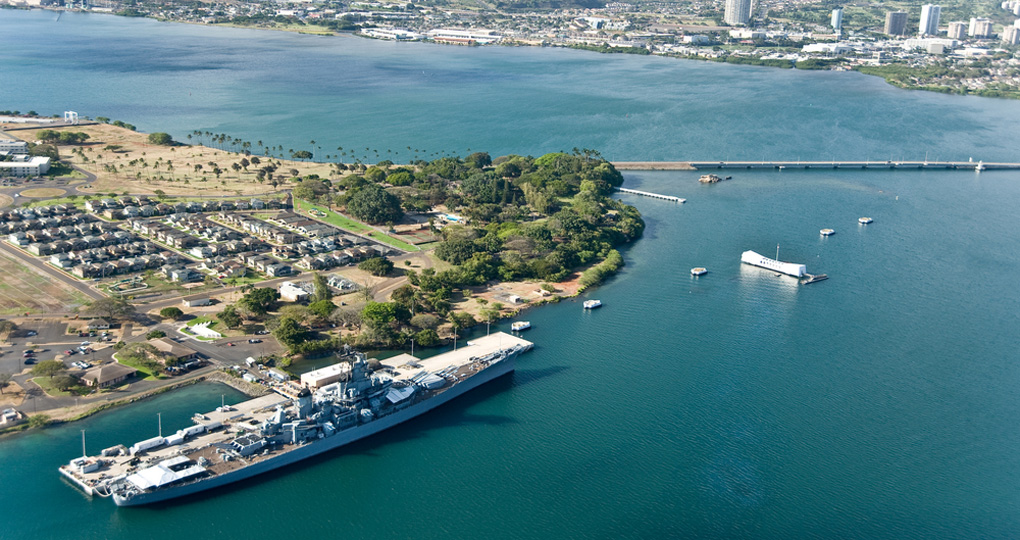 One of the most active volcano areas in the United States, Hawaii is home to two active volcanoes: Mauna Loa and Kilauea. Visitors can get information about the park and start their visit at the Visitor’s Center. You can visit the Chain of Craters Road, the Crater Rim Drive, and Devastation Trail, among other tourist routes.

This stretch of road is world famous for its twists and turns. On the drive you will see lush valleys, sparkling waterfalls, black sand beaches, and glimpses of the blue green ocean. Once you get to Hana you will be enchanted with the town. Make sure to keep going and see the Sacred Waterfalls.

This natural harbour became a place of infamy on December 7, 1941, when Japanese Imperial forces attacked the United States naval base here, bringing America into World War II. At Pearl Harbor you can visit the remains of the USS Arizona and the Battleship Missouri, WWII museum exhibits, and the Pearl Harbor Memorial. 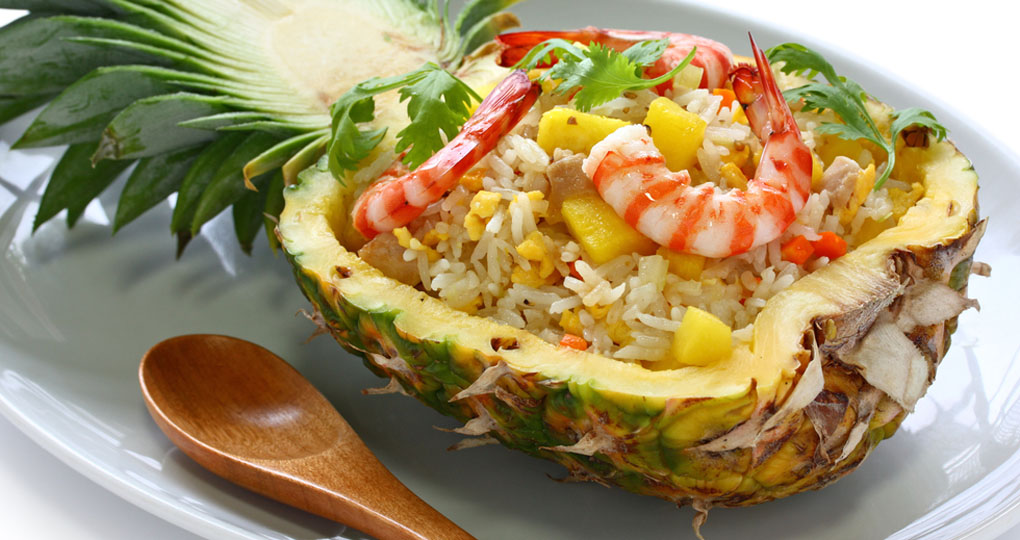 Many restaurants, carts or cafes have a plate special. This usually includes a scoop of rice, mac salad, laulau and haupia (coconut cream pudding), and a main course such as kalua pig, ono chicken, lomi salmon.

This frozen treat is iconic to Hawaii. It is a bowl of finely-shaved ice covered with locally sourced syrups. The syrup can be pineapple, strawberry, papaya, mango, azuki bean, or mocha ball. You can find this treat all over the Hawaiian Islands.

Poke is a raw-fish salad that is a staple in the Hawaiian Islands. It is made of raw fish, Hawaiian sea salt, inamona, limu kohu (seaweed), onions, soy sauce, garlic and ginger. There are many variations.

Maladadas are a Portugese doughnut that has become popular in Hawaii. The original is fried with sugar on it. You can find them everywhere in Hawaii. 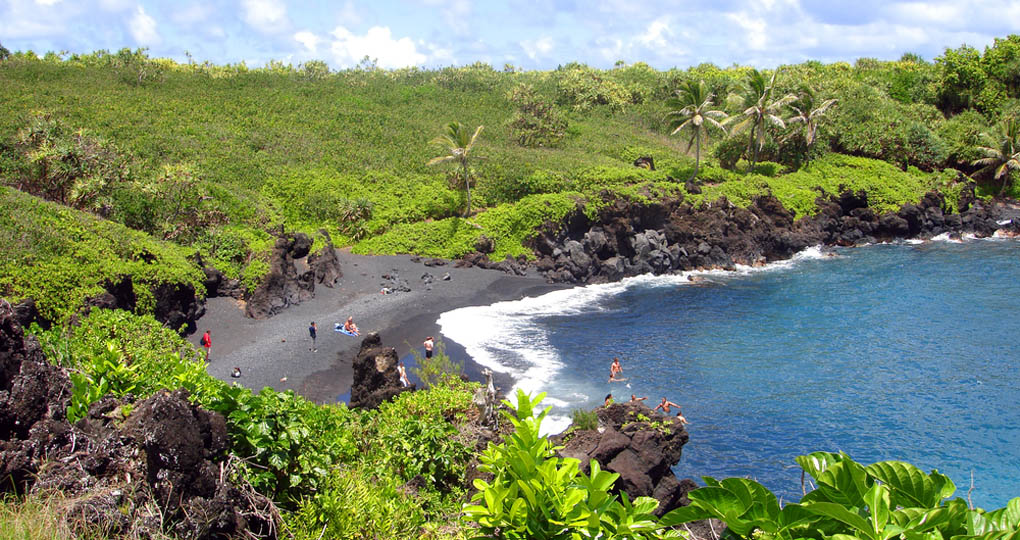 Do not touch anything in the ocean. Try not to walk or stand on a reef. Do not feed the marine creatures. Do not approach turtles or seals in the water. Do not litter on the beach or in the ocean. Be sure to wear biodegradable sunscreen that is approved for sealife. When hiking on land, carry a garbage bag and take your garbage with you. Stay on the trail. Do not pick flowers or plants. Don’t litter. You can rent a hybrid car or an electric car if you’re going to be driving. You can also rent the smallest car available that offers fuel consumption savings.

It’s hard to pick just one destination if you want to travel from the Hawaiian Islands, since there are many to choose from. There are direct flights from Hawaii to Samoa, New Zealand, China, Australia, Japan, the Philippines, Fiji, French Polynesia, South Korea and elsewhere.

Most Popular Itineraries for the Hawaiian Islands

The Aloha Oahu and Kauai Explorer offers a two island experience with a 9 day stay. There are explorer escapes for Oahu, Maui, Kauai and Hawaii that allow you to combine islands easily. The Hawaii and Tahiti Escape offers a two country tropical escape.

FIRST-CLASS | TAILOR-MADE: Head on a tropical getaway to the islands of Hawaii to explore the dramatic history of Honolulu and relax on the Garden Island of Kauai. Visit the resting place of the U.S.S. Arizona at Pearl Harbor and visit America’s only royal palace in Honolulu before hiking the stunning Waimea Canyon on the jungle-covered island of Kauai.