Hungary: Things to do

Every country has its outstanding and special attractions. Goway has selected its top 14 things to do in Hungary (not in any particular order) for you to enjoy on your visit to this destination. 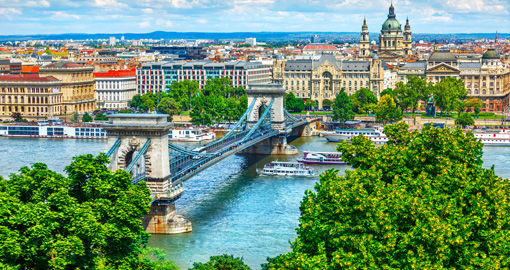 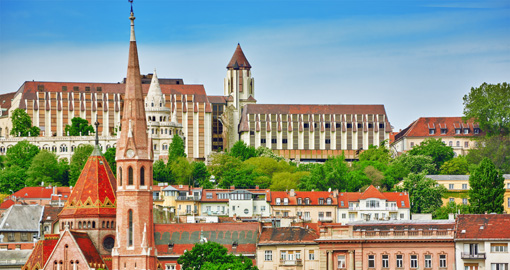 On the Buda side of the Danube River is Castle Hill perched on top of a large promontory. It is 1 kilometre/half a mile long reached either on foot or by funicular. This The most imposing building is the enormous Royal Palace which dates back to the 13th Century and once home to several Hungarian kings and now the venue of the Hungarian National Gallery and the Castle Museum which captures the history of the country over 2000 years. Fishermen’s Bastion is a viewing promenade with breathtaking views of the river and the Pest side below. The Buda Castle Labyrinth is a cave system which contains a collection of displays including the history of Dracula and figures from various operas. Other highlights on a Budapest vacation are the Hospital in the Rock Museum, used as a hospital during the Second World War and the architecturally beautiful Matthias Church which is 500 years old. 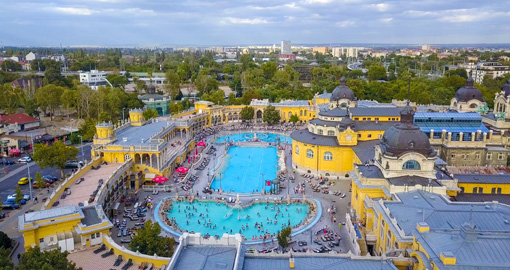 The therapeutic thermal baths are a special feature in everyday life in Budapest that must be experienced on Hungary tours. Széchenyi Baths (pictured) offer indoor and outdoor pools and spa treatments on the edge of popular City Park. The Gellert Baths are even more opulent, having been described as “taking a bath here is like taking a bath in a cathedral”. The medicinal spring here was famous as far back as the 13th century. The spa is decorated with a wealth of original Art Nouveau furnishings, artistic mosaics, stained glass windows and sculptures Full spa treatments are available. 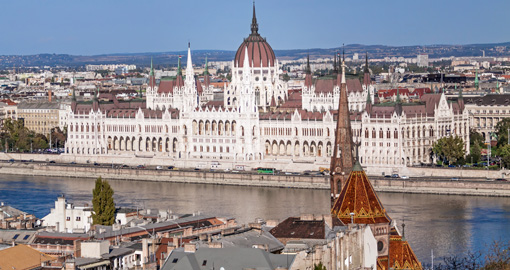 The Parliament building is a major landmark in Budapest due to its size and unique architecture. A tour of the building includes the 96-step Ornamental Staircase, the 12th Century Crown of St. Stephen and the Congress Hall. Its interior includes 10 courtyards, 13 passenger and freight elevators, 27 gates, 29 staircases and 691 rooms (including more than 200 offices). It is one of the two tallest buildings in Budapest. The main façade overlooks the River Danube. Inside and outside, there are altogether 242 sculptures on the walls. 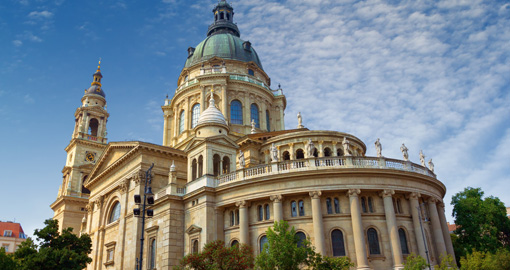 This is the most sacred Catholic Church in Hungary and home to the most revered relic, the mummified right hand of the church’s patron saint, King St. Stephen. In the interior is an outstandingly beautiful dome, complete with mosaics. Organ concerts take place here on a regular basis. 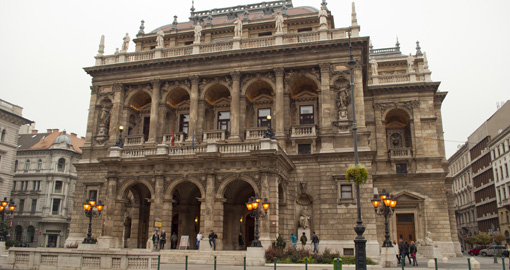 This impressive opera house is located on the Champs Elysees of Budapest. It was designed in 1884 and is one of the most beautiful buildings in the city. You can join a tour of the interior followed by a mini-concert every afternoon at various starting times.

This was the headquarters of the dreaded secret police during the occupation of Hungary by the Soviets but is now a permanent exhibition mainly about the 1956 uprising. Having survived two terror regimes, Hungary erected a memorial to the victims, to present a picture of what life was like for Hungarians in those times. Opened in 2002, the House of Terror presents the horrors in a tangible way to help people understand that the sacrifice for freedom was not in vain. 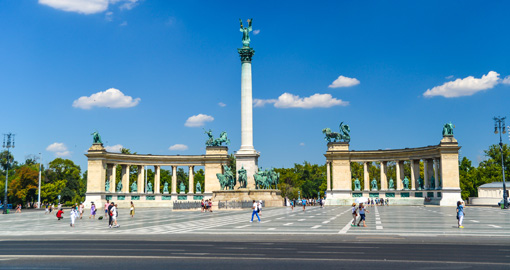 This is one of the major squares in Budapest to be experienced on a Hungary vacation and is noted for its iconic statue complex featuring the Seven Chieftains of the Magyars and other important Hungarian national leaders as well as the Tomb of the Unknown Soldier. The square lies at the end of Andrassy Avenue next to City Park and has played an important role in contemporary Hungarian history as well as having been the centre of many political events, such as the reburial of Imre Nagy in 1989. 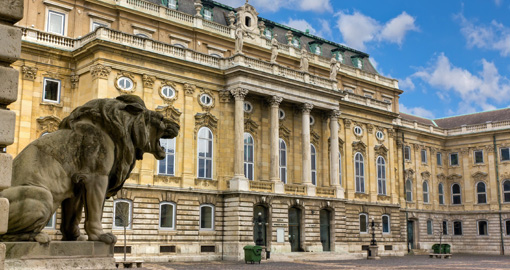 This is Hungary’s equivalent to the British Museum in London, England but definitely not as important. It contains a collection of the country’s most important historical relics. Visitors can follow the events of Hungarian history during the medieval period by way of outstanding artifacts from the time. One of the most valuable items is the ceremonial robe once worn by Hungarian kings at their coronations. 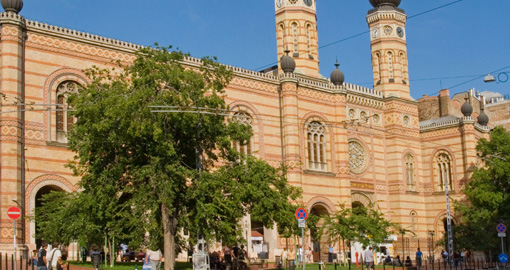 In what is known as the Jewish Quarter is this remarkable which is the largest synagogue in the world except for one in New York City. Built in 1859, it can accommodate 3000 worshippers. You can have a visit inside where the highlights are decorative carvings of the ark, the beautiful Rose Window and the Hungarian Jewish Museum and Archives. In the grounds is the Holocaust Tree of Life Memorial. 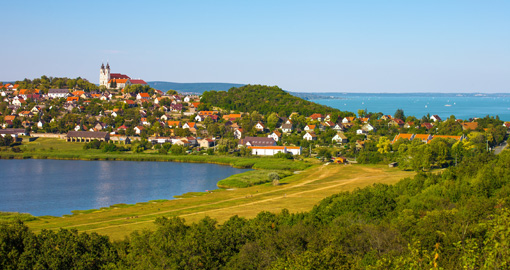 Lake Balaton, a freshwater lake, is one of the country's most scenic spots which can be visited on a Hungary vacation and is the biggest lake in Central Europe. It is an hour’s drive from Budapest and has been used as a retreat destination for centuries with its beaches, resort towns and hotels that are scattered over its 200 kilometre/120 mile shoreline. The hilly north shore is a wine-growing region with protected wetlands and hiking trails. Some of the highlights are the Festetics Palace dating back to 1745 a baroque building in the town of Keszthely, Tihany Abbey, a Benedictine monastery established in 1055, the Balaton Uplands National Park with its caves, buffalo reserve and hiking trails and Szigligeti Castle, over 750 years old. 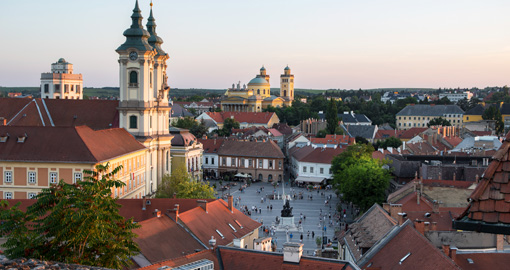 Eger is famous for its magnificent baroque buildings and offers lots to see and do. The Episcopal cathedral was built on Castle Hill with the city growing around it. The castle and basilica remain the city’s top sight, followed by the Valley of the Women, a series of wine cellars and restaurants built into surrounding hills. The Torok Kori Minaret, the northernmost Turkish minaret in Europe offers wonderful views of the surrounding countryside. 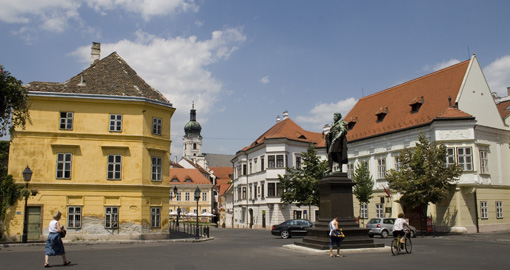 Gyor, situated between Budapest and Vienna, was ruled by the Mongols, Magyars, Czechs, and Ottomans. Everywhere you go, you will find statues and wonderful old buildings which include the Church of St. Ignatius of Loyola, an ornate Benedictine cathedral. 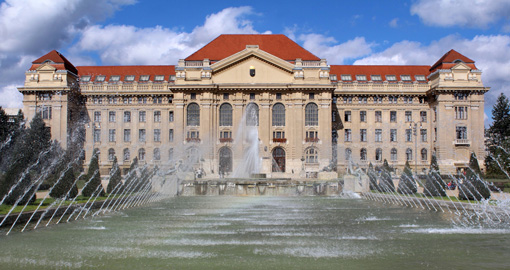 Debrecen was Hungary’s capital at various times over the centuries and is an important cultural centre, considered the intellectual center of the country. The city has a thriving music scene and is home to the Bela Bartok International Choir competition. The principal attractions include the Reformed Great Church, the largest Protestant church in Hungary the Deri Museum with its collection of ancient Egyptian artifacts and the annual Flower Carnival. 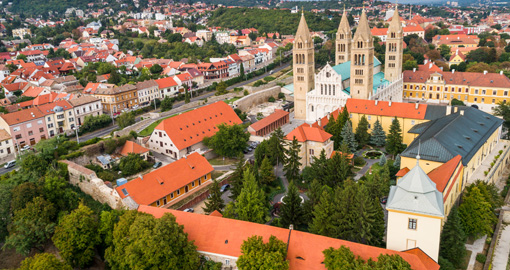 Pecs is a multicultural city where different ethnic groups co-exist peacefully together making it one of UNESCO’s Cities of Peace. It was home to the first university in Hungary founded in 1367. It has been ruled by Romans, Christians, and Ottomans. Excellent museums, medieval buildings and fine wines make Pecs a popular travel destination. Some of the highlights on Hungary tours are Pecs Cathedral, Pecs Synagogue and Mosque of Pasha Gazzi Kassim.