Journey into the heart of what makes Colombia a spectacular choice for a trip to Latin America.Explore the thrilling capital, Bogota, before going on to Medellin, the city of eternal spring famed for its nearby coffee regions, and the gorgeous Caribbean city of Cartagena. 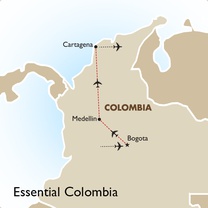 This 11 day visit to one of Latin America’s most colourful countries will challenge everything you think you know about the land that invented ‘magical realism.’ If you’ve never heard that phrase before, pack a book by Gabriel Garcia Marquez, the local literary star who popularised it.

The cosmopolitan city of Bogota is rich with history, particularly around La Candelaria, Plaza de Bolivar and the Cathedral of Salt. You’ll also visit the world’s best gold museum, with a chance to party the night away in the Zona Rosa, and zip to bird's eye views at Monserrate, the pilgrimage point overlooking the city.

A major cultural and culinary centre of Colombia, Medellin has shed a violent past to emerge as one of the country's 'must-visit' destinations. Enjoy a city tour including the Parque de Bolivar, along with a free day to explore the sights that interest you, or perhaps embark on a tour of the nearby coffee producing regions and towns.

Finally, Colombia’s most popular ‘tourist’ city Cartagena was one of the first sanctuaries for freed African slaves in the Americas. That heritage gives the city a distinctly different feel from its neighbours. Pay your respects at the monastery of La Popa, or visit the impressive San Felipe de Barajas Fortress.

This hotel is in a prime location, surrounded by the main industrial areas of the city, in a more developed urban area of Bogota. Salitre Plaza shopping centre and Gran Estación are close to the hotel and guests will find restaurants, bars, nightlife, shops and public transportation links in the vicinity. Facilities include a lobby with a 24-hour reception, hotel safe and lobby bar, as well as a business centre with conference facilities, 2 restaurants, a cafe, WLAN Internet access, 24-hour room service, a laundry service, and a car park.

Visit the well preserved historical colonial quarter of La Candelaria. There will be an opportunity for photographs at Plaza de Bolivar, the main square of Bogota. The Cathedral, the Congress Palace, the Cardinal's Palace, the colonial church of El Sagrario, the House of Independence, the Palace of Justice and the City Hall are located here. After, visit the famous Gold Museum where the world's greatest collection of pre-Hispanic Indian gold crafts is displayed. Then transfer to Monserrate where you will go up the hill on a cable car. In Monserrate you will be able to appreciate an amazing view of Bogota, it is also a site of pilgrimage for Catholics.

As you drive out of Bogota you are presented with a panoramic view of the city and the vast plateau of the northern area of Bogota. You will arrive to the small town of Zipaquira where you will take an underground tour to discover the famous Salt Cathedral.

Experience the extraordinary architecture and engineering of this remarkable underground mine. The cathedral was carved inside an active salt mine formed 250 million years ago, under the Halite Mountains. Here you will find 14 small chapels that represent the Stations of the Cross and Jesus Christ's crucifixion, a sanctuary and a main cathedral. Although this is a popular tourist destination to be visited, this is also a place of pilgrimage for the local community.

Located in the privileged and exclusive sector of El Poblado, surrounded by trees and mountains that provide a country setting, the hotel offers a warm and peaceful stay close to the main business centers, shopping and entertainment centre of the city of Eternal Spring. Guests can enjoy bedrooms and living rooms equipped with extensive technology. For entertainment and comfort the hotel offers Orvietto Restaurant, Lobby Bar and pool terrace. Cosy and elegant rooms are equipped with all international requirements for complete security- fire systems and security boxes but equipped with tasteful details. Guests may enjoy a work out in the gym or relax in the hot tub. The pool terrace offers national and international cuisine, Sunday barbeque and varied cocktails, with the sound of the piano.

This tour takes you to the most important sights of the "City of Eternal Spring" - Medellin.

Explore downtown Medellín and the historical centre. Listen to local musicians play the traditional "Guasca" music while visiting the Parque Berrio. Stroll through the hustle and bustle of downtown Medellin to the famous Botero Plaza with an exhibition of the Colombian artist Fernando Botero, whose sculptures have become a landmark of the city.

Take the Metro Cable up to Santo Domingo, which was once a notorious area of gang violence in Medellin. The cable car was constructed to make the inner city more accessible to people from the outskirts, and allows visitors a glimpse into the lives of the marginalized population. While enjoying the spectacular view you learn more about the transformation of Medellin from one of the most dangerous cities in the world into a fascinating melting pot of cultures with possibly the friendliest and warmest people in the world.

This luxurious hotel enjoys a stunning setting in Cartagena de Indias. The hotel boasts close proximity to a broad range of attractions in the area. Guests will find themselves within easy access of Santo Toribio Church, Puerta del Reloj and San Pedro Claver Church and Convent. San Felipe de Barajas Castle, and Simon Bolivar House and Museum are also located nearby. This stunning hotel enjoys a mesmerising design. The interior is superbly appointed, offering a luxurious setting in which to unwind. The guest rooms are eloquently designed, combining traditional and contemporary styles. The hotel offers unrivalled, personalized services and exemplary facilities, to ensure an unparalleled experience for every type of traveller.