10 Things to Do in the Galapagos Islands

If you are interested in wildlife, going for hikes, or uncovering historical tidbits, you’ll be in heaven in the Galapagos. To help you come up with specific ideas of what to do in the Galapagos Islands, we consulted our destination specialists and came up with the following.

It’s also a great time to visit the Galapagos Islands. There are new direct flights from Canada and the US to Quito, meaning that you can now get to Quito directly from Toronto, Vancouver, Montreal, New York, Houston, and Miami. A direct flight means only one connection to the islands once you arrive in Ecuador, which shortens your trip and gets you to the islands faster.

There are many more than 10 things to do in these biodiverse islands, but these options give you an idea of the breadth of activities available to travellers here.

Wonders of the Galapagos Islands

Explore volcanic landscapes and spot incredible wildlife on an adventure to the Galapagos Islands. Staying on Santa Cruz Island, you’ll head on day trips to explore this magical archipelago. You’ll spot giant tortoises in the highlands, hike along volcanic beaches full of iguanas and penguins, and experience the stunning biodiversity of this island chain.

1. Go looking for a flightless cormorant

Of all the animals that only exist in the Galapagos Islands, the flightless cormorant is perhaps the most unique. It’s not the strangest looking or the most colourful of the animals in the Galapagos, but it’s a one-of-a-kind bird that lost the ability to fly, making it the only cormorant in the world that cannot fly. You’ll only find flightless cormorants on Fernandina, where they adapted to lose their flight ability due to the lack of predators. The loss of flight allowed them to swim faster in order to catch food in the water, much like penguins. 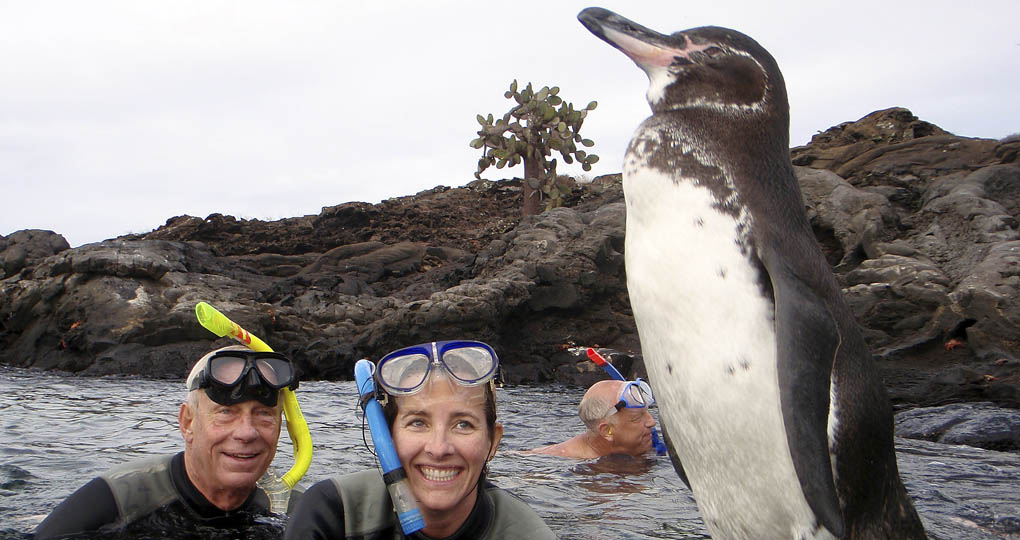 Speaking of penguins, the Galapagos has penguins. Yes, you read that correctly. There are penguins living on the equator. In fact, some of the penguins live on islands north of the equator, making them the only penguins endemic to the northern hemisphere. You’ll find most of these penguins living on Fernandina and Isabela, although there are also smaller numbers of birds on Bartolome, Santiago, and Floreana. They’re much smaller than the kinds of penguins you’d find in Antarctica—the second-smallest species overall, in fact.

3. Cruise the islands on a private yacht

A cruise is the ultimate way to see the islands, as it gives you the freedom of moving from island to island to see as wide a variety of attractions as possible. As well, you sleep on board, enjoying all the comforts of a modern hotel, but purely at your disposal. Private yachts make for great bases for a family vacation, so consider getting the family together to head on a multi-generational trip you’ll never forget. Even if you have a big family, Goway can find the right boat for you.

4. Stay overnight on one of the islands

While a cruise is the best way to see the islands, you should consider spending at least one night on one of the islands. An overnight stay on Santa Cruz is a particularly good option. You can stay at the Magic Camp Tortoise Reserve or Pikaia Lodge, which are both located within Galapagos tortoise reserves. That means that you’ll share the landscape with the famous giant reptiles that have defined the islands since Charles Darwin visited. Furthermore, an island stay lets you relax on land and experience the carefree nature of the animals on the islands. You can drink beer with sleepy seals at your feet or share the sand with some iguanas having fun in the sun.

Enhance your Galapagos cruise with an overnight stay at Galapagos Magic Camp, set far away from the hustle and bustle of ordinary life. Enjoy quiet, natural accommodations in the Santa Cruz Highlands and share the company of hundreds of Giant Tortoises that call the hillside home.

Being able to explore the underwater worlds of the islands is among the best aspects of visiting the Galapagos. In particular, you can swim, snorkel, and dive alongside seals and reef sharks. If you’re at all worried about the sharks, remember that they’re harmless and mostly just curious about sharing the water with you. If you’ve ever wanted to have a close (but safe) encounter with a shark, this is the place.

6. Follow in the footsteps of Darwin at the Charles Darwin Research Station

If you head to Santa Cruz, you can visit the Charles Darwin Research Station, named after Darwin, who famously visited the islands in 1835 when travelling aboard the H.M.S. Beagle. The station carries on the spirit of Darwin’s research into the remarkable species living on the islands. It also works hard to support conservation efforts on the island. When you visit, you can learn about Darwin’s time on the island and his legacy, but you can also see the incredible conservation being done throughout the islands. You can also see preserved species from the past in the on-site natural history exhibition. 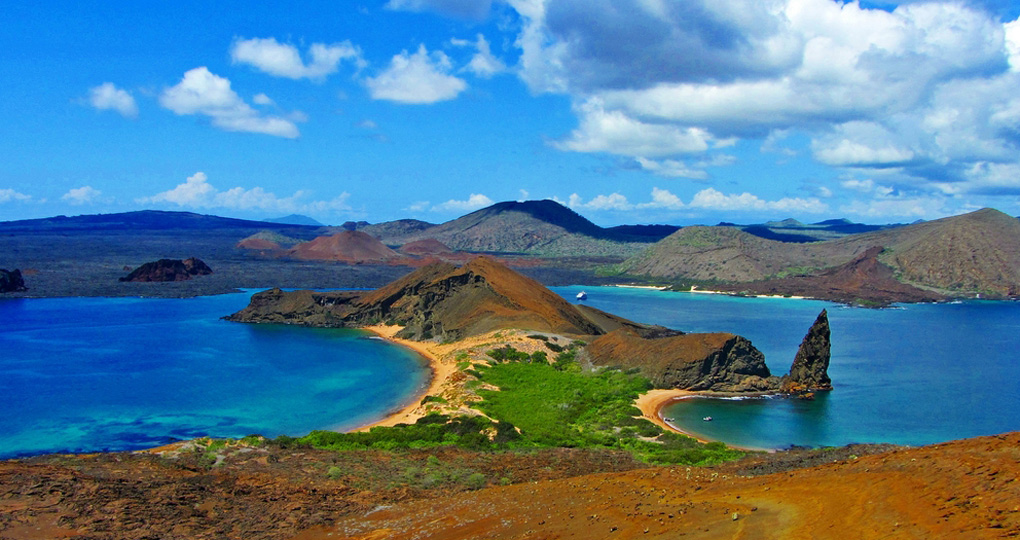 All of the Galapagos Islands are volcanic, but that doesn’t mean they’re all the same. However, they are all worth exploring, even if you’re not much of an amateur geologist. You can explore the impressive volcanoes of Negra and Wolf on Isabela, hike alongside the Twin Craters in the highlands of Santa Cruz, or explore lava tubes on Santiago. Also be sure to head to Sullivan Bay to hike up the lookout and gaze upon Pinnacle Rock, arguably the most famous rock formation in the islands.

8. Drop a letter in the barrel of Post Office Bay

Since the 18th century, people have been using a barrel at Post Office Bay of Floreana as a makeshift post office. Back then, whalers were lonely and didn’t have a means of getting letters back home to loved ones, so they set a barrel on this beach and used it to post mail amongst themselves, with other whalers then sorting through the letters and seeing if they would be near the intended destinations when they got back home. All these centuries later, people still use this barrel like the original whalers did. When you arrive at Post Office Bay, you can sort through the letters in the barrel and see if there are any letters you can deliver when you get back home. You can also post your own letters to see if some other kind-hearted traveller delivers it after a future visit. The barrel is set alongside a bunch of driftwood and debris that looks like something out of Robinson Crusoe. 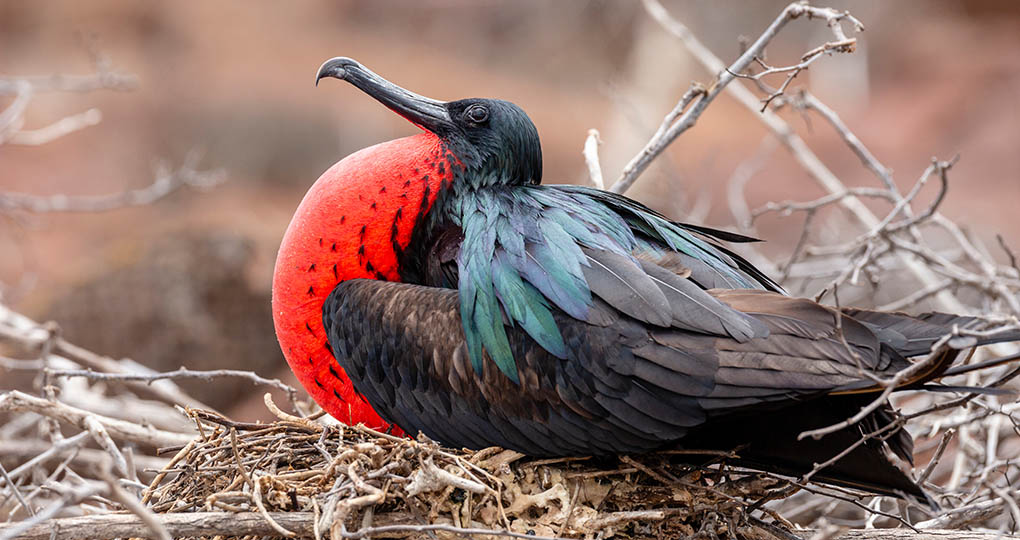 The Galapagos is home to a vast number of colourful birds that are unlike any others you’ll find around the world. Blue-footed boobies are the most famous and you’ll find them on several islands, including Espanola, North Seymour, Eden, and Lobos. There are also albatrosses, which nest on Espanola, and frigatebirds on Eden, with their gorgeous red-breasts. The mating dances of these birds are particularly fascinating. Blue-footed boobies bop and weave, while albatrosses slap their beaks together and duel like sword fighters, all the while ducking and diving. It’s all very fascinating and hilarious.

10. Search for the hybrid marine and land iguana

We’ve talked a lot about the Galapagos Islands being home to some of the most unique animals on the planet. The marine iguanas that live in the waters that feed on seaweed are one such species, while the land iguanas that subsist off of prickly-pear cactus on land are another. But there’s also the hybrid iguana, which combines elements of both species into one super-rare hybrid species. Under two dozen have ever been observed in the wild and they’ve only been seen on South Plaza, a tiny island that’s off many tourist trails. This incredible hybrid combines physical characteristics of both marine and land iguanas. They are mostly black like marine iguanas, but have yellow stripes around their neck consistent with land iguanas. They have long claws like marine iguanas, but use these claws to climb cactuses instead of underwater rocks. There’s no guarantee you’ll see a hybrid iguana in the Galapagos, but a visit to South Plaza is worth the chance.

Rediscover Manaakitanga on a Trip to New Zealand in 2022 & Beyond

FIRST-CLASS | TAILOR-MADE: Combine two of South America’s (and the world’s) greatest landmarks on one itinerary! After exploring Lima, spend a few days in the Sacred Valley of the Incas and tour spectacular Machu Picchu, then head to Quito and connect to the Galapagos Islands to discover fascinating landscapes and incredible wildlife.

Cruise the Galapagos Islands while on board the Santa Cruz II, a 90-passenger vessel that will take you to many of the highlights of this incredibly unique wildlife destination.

DELUXE | CRUISE: The M/Y Infinity exceeds everything seen before. High performance, unrivaled comfort, respect for the environment, and stunning style all combine to ensure that the Infinity is one of the most ideal modern yachts for exploring the Galapagos Islands.