Belgium: Things to do

Every country has its outstanding and special attractions. Goway has selected its top 16 things to do in Belgium (not in any particular order) for you to enjoy on your visit to this destination. 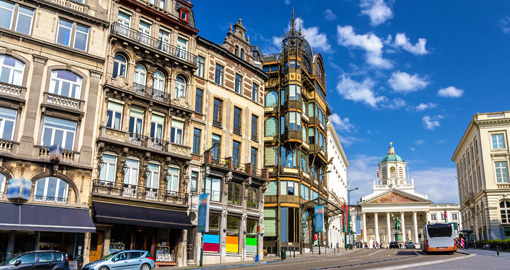 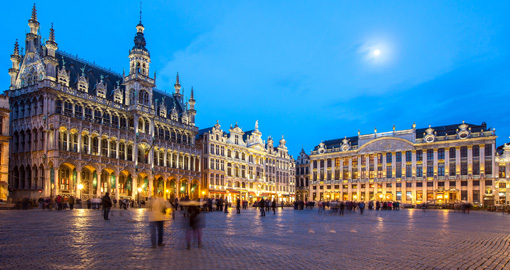 This is the very heart of the city and is a UNESCO World Heritage site. This beautiful medieval square is probably the first place to visit in Brussels on a Belgium vacation. The architecture all around the square is exceptional and includes the Gothic 15th Century Town Hall with its valuable paintings, sculptures and tapestries which can be visited, close to 40 guildhalls (once meeting places for commerce) and other buildings dating from between the 14th and 17th Centuries. In mid-August, the Flower Carpet takes place here with 700,000 cut begonias. 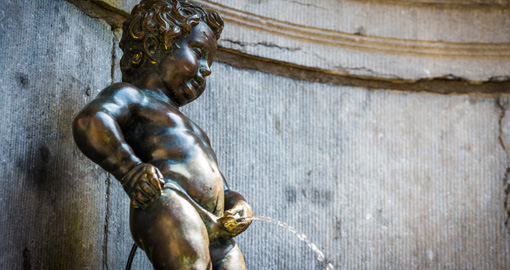 Together with the Grand Place, this is the most visited site in Brussels. It is a small statue made of bronze, created in the 17th Century. To be clear what this is exactly, it is a statue of a boy urinating into a fountain. When celebrating Belgian beer, he is connected to a keg and pees beer for the passersby. The boy has his own wardrobe of outfits, which are on display in the City Museum, and he is included in several celebrations throughout the year. 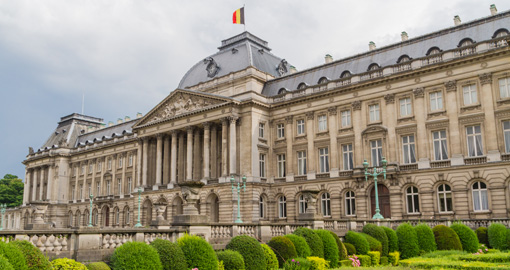 This imposing building was the official residence of Belgian royal family but is now used for visits by foreign heads of state, as the royal family now resides in another palace on the outskirts of the city. In front of the palace is the beautiful Royal Park, and opposite is the Parliament Building on the other side of the park. The palace is home to four famous contemporary art pieces. Notable rooms in the palace are the Goya Room, where precious Spanish tapestries hang, the Vase Room, built in the early 1800s, the Large White Room with Empire furniture, the Music Room, the Throne Room, and the Grand Hall with its ceiling murals.

This edifice was constructed in 1958 for the World Exhibition and was modelled on the atomic structure of an iron crystal. You can explore, on a Belgium vacation, the unusual tube walkways and spheres as well as see a permanent exhibition which details the history of the building. It is 102 metres/332 feet high and, as with a real atom, it consists of “lines” or tubes connecting spheres. Each of the 9 spheres has been named in honour of a famous scientist or Nobel Prize winner, and 6 are open to the public. The main sphere houses the permanent exhibition. In other spheres, you can see multimedia displays and there is a specific area developed for children. From the highest sphere, you can look out over the city. 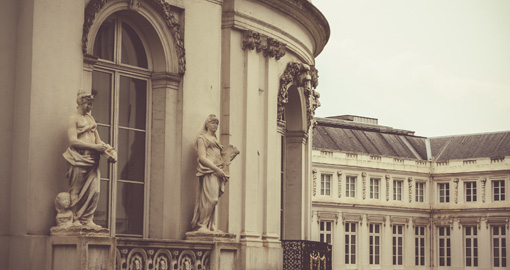 Like most capital cities, Brussels has its fair share to enjoy on a Belgium vacation. The Royal Museums of Art is a collection of several museums which include the Museum of Old Masters, the Modern Museum of Art, and the Fin-de-Siecle Museum. Together the museum collections cover paintings, sculptures, and drawings from the 15th to 21st centuries. The Magritte Museum is dedicated to the work of the Belgian surrealist artist, Rene Magritte, considered one of the most important 20th Century artists in the world. With more than 200 pieces, it is the largest collection of Magritte’s work anywhere. An enjoyable museum is the Musical Instruments Museum, which holds one of the most important and largest collections of musical instruments in the world and includes 9,000 instruments of which 1,100 are on display. The instruments are historic, traditional, and modern from all periods and cultures. With the use of audio recordings, you can listen to how the instruments sound. 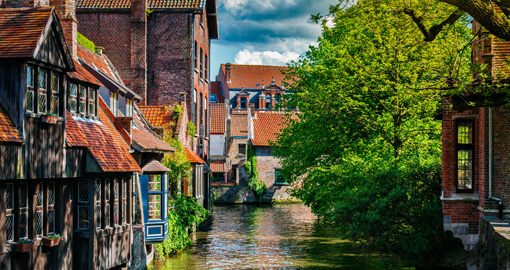 These beautiful and photogenic canals which run through the centre of Bruges can be explored on foot, while on a Belgium vacation or a cruise. Bruges is known as the “Venice of the North” and a boat trip will help you to get your bearings while seeing some impressive, attractive, old houses including historic churches and old whitewashed almshouses. 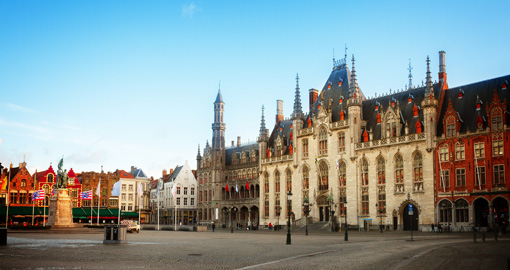 In the very centre is the Big Market Square in which you will find the beautiful gothic Stadhuis (City Hall) which dates back to 1420 and is one of the oldest city halls in the Benelux countries. Inside are old portraits and several rooms with hanging vaults and historic murals which show scenes from the history of Bruges. In the historic chamber next door are original documents and artifacts about the history of the city’s administration through the centuries. On the ground floor, there is a free multimedia exhibition which explains the structural development of the Burg square and the City Hall. 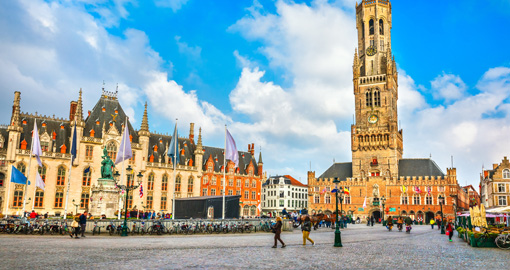 This is an outstanding 13th Century tower, 83 metres/ feet 250 tall featuring a staircase of 366 steps which, if climbed, will reward you with panoramic views of Bruges. On the way up, you pass the former treasury of the belfry where the City archives were kept in the Middle Ages. The 47-bell carillon is still played manually on a changing schedule (usually on Wednesdays and weekends). 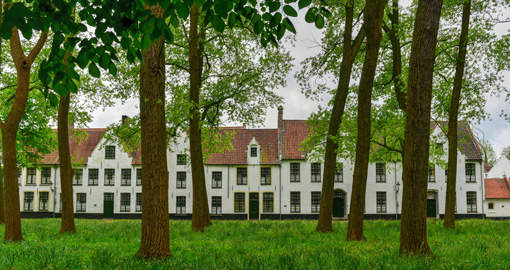 This is a charming 17th Century house converted into a small four-room museum which will show you how a house in medieval times was furnished and what contents existed. A beguinage was a community of women who followed the example set by the apostles: poverty, simplicity and preaching. Today the beguinage is inhabited by nuns of the Order of St. Benedict and several Bruges women who have decided to remain unmarried. Inside the gates, you experience a peaceful view of an expansive lawn planted with poplars and surrounded by groups of houses.

When in Bruges on a Belgium vacation, you can’t ignore chocolate, as this city is world-famous for this delight. There are many shops selling this commodity and if you are really into this sweet treat, visit the Choco-Story Museum, which covers several floors of an old house and describes chocolate’s transition from cocoa into chocolate. Watch a chocolate-making demonstration and, of course, buy some.

The Belgians are also known for their love of French fries. The Friet Museum is the world’s only frites (fries or chips) museum which tells the story of the potato from South America and how it has evolved into a fry. And, of course, you can try some samples. 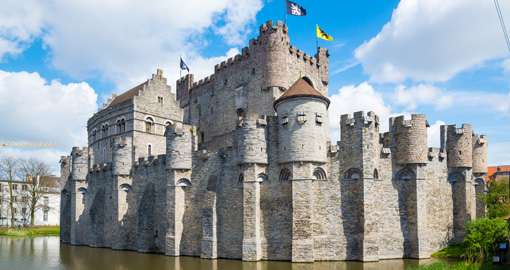 This 12th Century castle is modelled on the Crusader castles in the Holy Land and is complete with a moat and turrets. The present castle was built by Count Philip of Alsace Based on his encounters while participating in the second crusade. The castle served as the seat of the Counts of Flanders until they abandoned it in the 14th century. The castle was then used as a courthouse, a prison. Inside are a museum and a prison with an exhibition of various torture instruments. 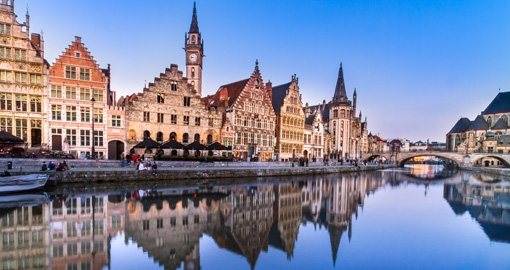 An interesting neighbourhood district in Ghent is Patershol with its winding streets and cobblestone lanes whose old-world houses were once home to leather tradesmen and to the Carmelite Fathers. Here you can imagine yourself back in the Middle Ages. There are a number of small shops and restaurants. It is blocked off to cars, which adds to its charm. Graslei is a waterside quay in the historic city centre. Originally a medieval port, it is now a cultural hotspot in the city with its large number of cafes, and along with its historical buildings, is a protected district. 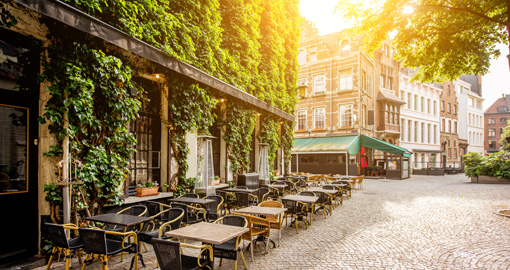 Antwerp is Belgium’s second largest city and its biggest port. It offers both the very contemporary and the old, on a Belgium vacation. The Eilandje is a neighbourhood of warehouses which have made way for museums, artists’ workshops, and coffee bars. The Zurenborg District features a large number of Art Nouveau townhouses and neo-classical mansions. The houses were often named and decorated with accompanying names such as The Sunflower, The Rose, The Tulip, etc.

The M HKA (Museum of Contemporary Art) is considered to be one of Belgium’s best contemporary museums to be visited on a Belgium vacation. Its collections and temporary exhibitions emphasize works from the 1970s on and feature both Belgian and international artists. The MAS or Museum by the Stream is a large structure made of red sandstone with its windows resembling waves and is surrounded by ships. Exhibits include old master paintings plus tribal artifacts and video installations. The Rubenshuis was built as the home and studio of the renowned Belgian painter, Rubens, dating back to 1611. It has been restored but the furniture dates from Rubens’ era. There are 14 Rubens canvases on display. 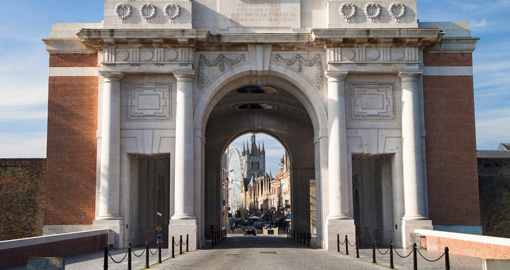 The Ypres (Menin Gate) Memorial bears the names of more than 54,000 soldiers who died before 16 August 1917 and have no known grave in Flanders. It is one of the most well-known war memorials in the world. Between October 1914 and September 1918 hundreds of thousands of servicemen of the British Empire marched through the town of Ypres's Menin Gate on their way to the battlefields. Soon after its completion, the memorial became an important place of pilgrimage for visitors to the battlefields. Since 1928, the Last Post has been sounded every evening at 8 pm at the memorial. Only during the Second World War was the ceremony interrupted.