Things to do in Romania

Every country has its outstanding and special attractions. Goway has selected its Top 14 Things to do in Romania (not in any particular order) for you to enjoy on your visit to this destination. 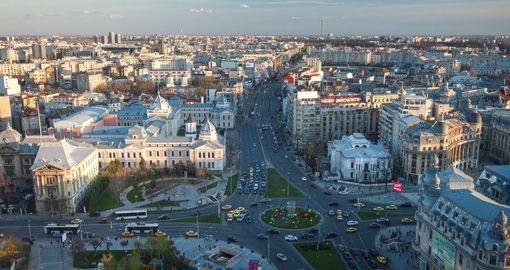 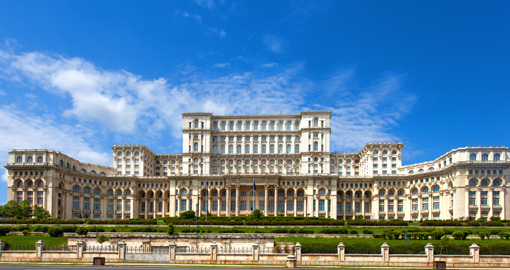 The imposing Palace of Parliament is the world’s second-largest administrative building after the Pentagon and the former dictator Nicolae Ceausescu’s creation. The building has more than 1000 rooms, 20 floors (8 underground) and entry are usually by guided tour which should be booked in advance on a Romania vacation. Today the building houses the country's parliament and associated offices. The construction involved 400 architects. It was named the People’s House because it took 20,000 workers to build it. The interior is extremely lavish with much to see. 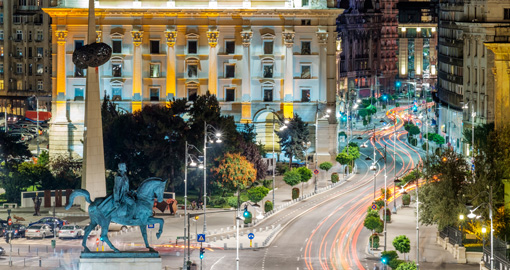 This is Bucharest’s best-known street and a famous thoroughfare that runs through the heart of the city. If you want an architectural treat and learn about the history of Bucharest, walk the complete length of the street which is 3 kilometres/1.8 miles long and is lined with fine houses (the oldest dates back to 1810), palaces, churches, hotels, upmarket shops and museums. The northern part is mainly residentially and noted for its houses and palaces. The southern part has many shops, restaurants and cafes. Along the way are several small parks.

The former residence of Romanian dictator Nicolae Ceausescu for 25 years can now be visited on a guided tour. It was built in the 1960s and has 80 rooms It is elegant outside but the interior supposedly lacks good taste complete with a movie house and a swimming pool. The decor has been described as “neo-classical kitsch, complete with solid gold toilet roll holders”. The private quarters are furnished in the style of those in the Louvre, Buckingham Palace and Versailles. ‘A visit will give you an idea of the opulent lifestyle that Ceausescu and his family enjoyed. 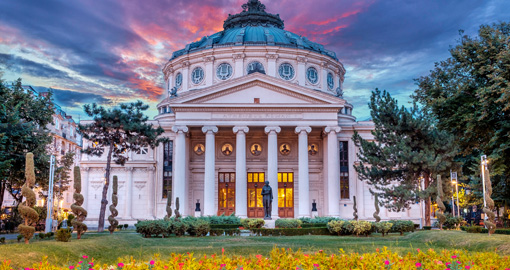 Arguably the finest building in the city, the Romanian Athenaeum was designed by a French architect in 1888 and stands in the busiest public square. It is the home of the Romanian Philharmonic Orchestra and the acoustics are renowned for being outstanding. It is a symbol to the locals who see it as an architectural and spiritual landmark. The façade is fronted by 6 enormous columns and the entire building is covered by a monumental dome. The inside of the Athenaeum has a capacity of almost 800 seats and the ceiling is decorated with a fresco consisting of 25 parts, each of them describing a certain significant episode in the history of the Romanian people. 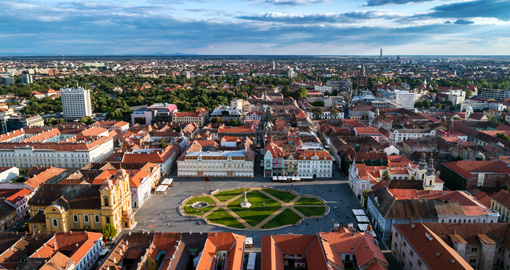 Timisoara is the largest city in Western Romania and the third largest in the country. It has been influenced by several cultures including the Romans, the Turks, the Germans and the Serbs reflected in its attractive architecture etc. and have been called “Little Vienna” with its many parks, gardens and public squares. Victoria Square is an elegant square in the centre of the city with many baroque buildings. The Orthodox Metropolitan Cathedral was built as a memorial to those who lost their lives during the 1989 revolution which overthrew the Communist regime. There are several other outstanding churches in the city. The Museum of the 1989 Revolution is an exhibition showing anti-communist documentation, posters and photographs from that era. 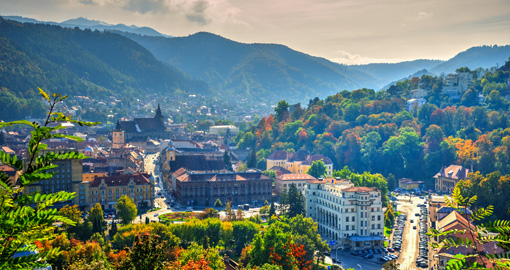 Brasov is ringed by the peaks of the Carpathian Mountains and is a city with exceptional gothic, baroque and renaissance architecture plus a wealth of historical attractions. It is surrounded by walled fortifications, some dating back to the 15th Century. It exudes a distinctly medieval atmosphere and has been used in a number of period movies. It is home to one of the narrowest streets in Europe, only 1.3 metres/4 feet wide. The centre of attraction is the Old Town Hall Square with its ornate baroque buildings. Council Square is lined with beautiful red-roofed merchants’ houses. In the square is the Black Church. The interior is beautiful with balconies, stained-glass windows, an enormous organ with 4000 pipes and a wall adorned with amazing Turkish carpets. 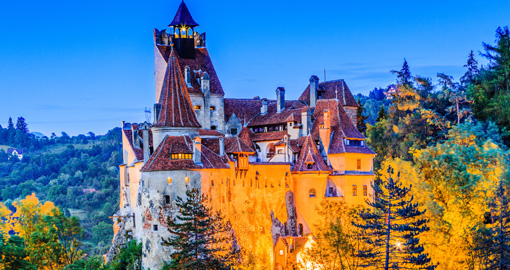 Bran Castle is about 30 kilometres/19 miles from Brasov. It is a national monument and landmark in Romania and is commonly known as Dracula’s Castle. It is not true that Bram Stoker, the author of Dracula drew inspiration from this castle. However, it is a fascinating fortress dedicated to displays of art and furniture from the period 14th to 19th Centuries. Narrow winding staircases lead through some 60 rooms, many connected by underground passages Located on a hill, it is one of the most beautiful medieval castles in the country to be visited on trips to Romania. The history of Bran Castle goes back to the 14th Century. At the bottom of the hill, there is a small open-air museum exhibiting peasant structures such as cottages, barns, household objects and costumes etc. from across the country. 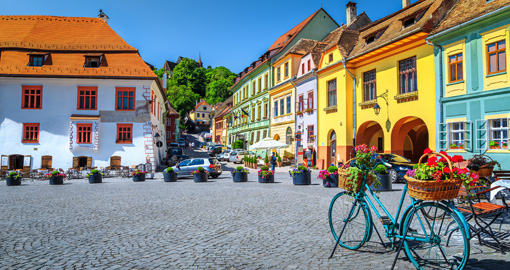 Sighisoara is located in the historic region of Transylvania and is one of the most beautiful and best-preserved medieval towns in Europe listed by UNESCO as a World Heritage Site due to its well-preserved walled old town full of winding cobblestone streets, secluded squares, ornate churches and merchant houses. Each year a Medieval Festival takes place in the old citadel in July. The Sighisoara Citadel is a 12th Century Saxon edifice and is also listed as a UNESCO World Heritage Site. Inside are a clock tower built in 1360, a monastery church and a weapon museum. The Citadel Square is a quaint small square which lies in the heart of the Citadel. In the old days, street markets, craft fairs, public executions and witch trials were held here. 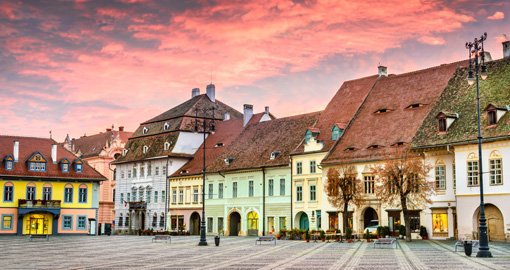 Sibiu was the largest and wealthiest of the seven walled citadels in the country and was built in the 12th Century by German settlers. The Old Town retains the grandeur of its earlier days when rich and powerful guilds dominated. Sections of the medieval wall still guard the historic area, where narrow streets contain 17th Century buildings. The Upper Town is home to most of Sibiu's historical sites with 3 beautiful squares and a cathedral and the Lower Town is lined with colourful houses on cobblestone streets bounded by imposing city walls and defence towers. Three 15th Century towers have survived. 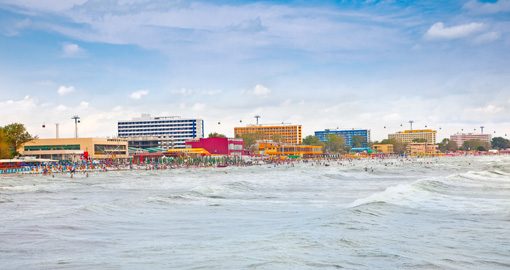 Mamaia is Romania's most popular vacation resort located on the Black Sea. It has an 8-kilometre/5mile long beachfront, one of the largest in Europe, complete with beach bars and cafes. The resort is very lively in the evenings with countless nightclubs. It is the only resort in Europe to have pure white sand only found in tropical places such as Hawaii. There is a large selection of accommodations while on a Romanian vacation. 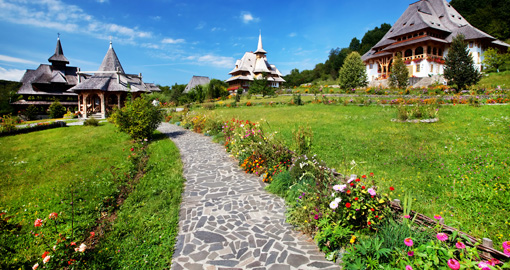 These are a group of almost 100 Orthodox churches from different periods and areas which make Maramureș a living museum. The churches were built starting from the 17th Century to the 19th Century, a reaction to the prohibition of stone churches by the Austro-Hungarian Empire. They are painted with Biblical scenes, mostly by local painters. The most characteristic features are the tall tower above the entrance and the massive roof that seems to dwarf the main body of the church. 8 are listed by UNESCO as World Heritage Sites 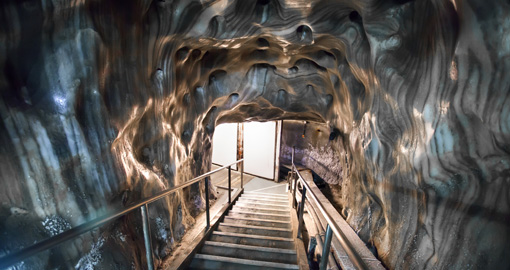 Salina Turda is located near the city of Turda. It is a very popular tourist site. The underground gallery of this mine is a geological reserve. You enter by a descent down the stairs to the stepped gallery opened in 1987. You continue through the horizontal gallery that brings you to the Franz Joseph gallery opened in 1740 to Joseph’s Balcony which is carved from salt. 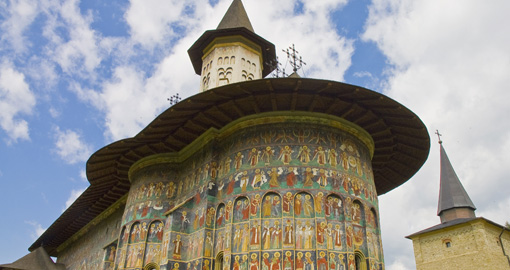 The Painted Monasteries are in southern Bucovina in northern Romania. Most of them have been declared World Heritage sites by UNESCO. They are all in very isolated places surrounded by farms and pleasant countryside. There are guides offering tours of the Monasteries on trips to Romania. These Romanian Orthodox monasteries are painted with stories from the Bible and from history. Each painted monastery is distinctive in colour and has a variety of biblical stories. These were created at a time when local peasants could barely read or write. Today the monasteries are pilgrimage sites and nuns live and work at most of them. 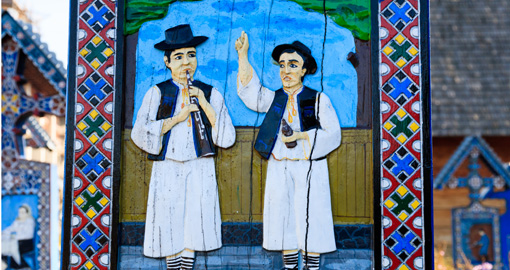 This is a collection of painted wooden headstones in northern Romania that tell stories of the deceased. The character of the person buried under the headstone is depicted in a rough painting as well as being described in a humorous epitaph. In the local culture, death is a joyful moment filled with anticipation for a better afterlife. The tombstones are colourful and beautifully carved in wood. The epitaph is usually a poem that rhymes about what he or she liked most in life and sometimes about the way they died. They give a wonderful insight into the lives of simple and honest people who lived in Sapanta. Try to find a local guide who can translate the writings on the headstones for you.