The 'What, Where, When and Why' of a Middle East Vacation

If you only read the headlines, you’re missing a lot of the story. Parts of the Middle East have been home to unspeakable tragedy, but there are many countries in the region that are safe and often overlooked by travellers wanting to see the world. Don’t make the same mistake that others do.

Head on a Middle East vacation to Egypt, Jordan, Israel, the United Arab Emirates, and Oman and see the treasures of the region. From incredible history to breathtaking landscapes and welcoming cultures, these countries have it all.

Why You Should Go

As one of the oldest regions of the world, the Middle East is home to a lot of bucket list items. The Pyramids, Petra, the Dome of the Rock, the Western Wall, the Burj Khalifa – you’ll find all these unsurpassable treasures on a Middle East vacation. The sheer number of world icons present in the Middle East should be enough to justify a trip. But if you need more reasons to head on a trip to the Middle East, we’ve got them.

Possibly the most popular country in the Middle East, Egypt has regained its status as one of the hottest destinations in the region. For example, tourist numbers to Egypt have quadrupled over the past year and you’ll find excellent deals on vacation packages to the country, as tour companies continue to lower prices to attract returning customers. You’ll find luxury for less here, in addition to the Pyramids, the Sphinx, the bustle of Cairo, and all the other reasons people love to travel to Egypt. In fact, the country is bound to get so popular again that you should head there as soon as you can in order to beat the crowds.

Although some of the other countries in the Middle East aren’t in the midst of a renaissance like Egypt, they remain highly-appealing destinations. Israel has long been a country of indescribable historical and cultural significance. If you love history or religion, you’ll adore it. Jordan is an accessible destination and can accommodate short vacations while still having must-see historical highlights. The United Arab Emirates is second-to-none when it comes to luxury and the glitz and glamour of premium travel, while Oman is sure to become one of the hottest destinations in the region. It’s an underrated nation and the hidden gem of the Middle East. Beat the trendsetters and see it first.

DELUXE | PRIVATE-GUIDED: This tour is a true classic designed to give the traveler with limited time a superb introduction to the civilization of Ancient Egypt, focusing on the Nile and its importance to the people.

What to Do in the Middle East

There is a lot to do when you head on a Middle East vacation. In fact, if we had no length limit on this article, this section could go on seemingly forever. When you visit the Middle East, you’ll have your pick of cultural experiences, tours of historical wonders, and adventures through stunning nature.

In Egypt, you can spend your time bartering for goods in the souks of Cairo, the most famous of which is Khan el Khalili. You can cruise the Nile from Aswan to Luxor, visit the southern ruins of Abu Simbel, or imagine yourself a modern-day Indiana Jones as you explore the temples and pyramids of Giza, Memphis, and the Valley of the Kings. In Jordan, you can ride a camel through the desert sand dunes of Wadi Rum to recreate the Bedouin experience or embark on an ATV ride across the dunes, experiencing the wind in your hair as you enjoy the thrill of speed. You can follow in the footsteps of biblical figures by heading to Mt. Nebo, where Moses first spotted the Promised Land. You can float in the waters of the Dead Sea, buoyed by the low elevation and the incredible concentration of salt in the water. In terms of historical treasures, few sites around the world compare to Petra.

More historical wonders await you in Israel, where you can focus on the Old City in Jerusalem and see its collection of sacred sites from Judaism, Christianity, and Islam, including the Western Wall, the Church of the Holy Sepulchre, and Al-Aqsa Mosque. You can hike the rim of the Sea of Galilee or float in the Dead Sea in Israel. You can see the Masada or experience the vibrant nightlife and food scene of Tel Aviv, one of the world’s party capitals. 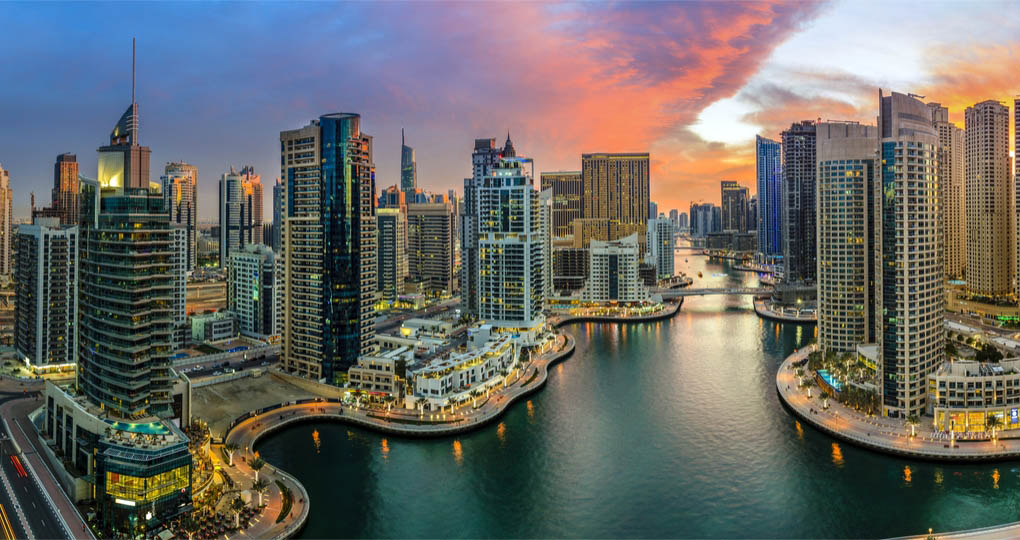 In the Emirates, you can also experience the glamour of the nightlife in Dubai. You can spend your time shopping through the city’s many souks and malls, including the largest mall in the world, The Dubai Mall. You can experience the tourist highlights, such as climbing the Burj Khalifa and taking a helicopter ride over the city to see the Palm Jumeirah and World Islands from the air. Abu Dhabi lets you deep-dive into the country’s fascinating history and admire its massive palaces and mosques while you can satisfy your inner adventure and go camping in the Rub Al Khali Desert, southwest of the city.

And let’s not forget about Oman, which has magnificent desert landscapes in Sharqiyah and defies the arid desert image at the water holes of Wadi Ash Shab. You’ll also find stunning architectural treasures like the Sultan Qaboos Grand Mosque and the Sultan’s Palace.

Where to Go in the Middle East

Where you go depends on what you want to do on a Middle East vacation. However, there are essential stops in each country.

In Egypt, it’s essential that you visit Cairo to explore the largest city of the Middle East and see the Pyramids of Giza, the Sphinx, and the wonders of the Egyptian Museum, including all the mummies and Ancient Egyptian artefacts you could hope for. You’ll also want to head along the Nile River at some point, preferably on a cruise between Aswan and Luxor. If you have the time, fit in visits to Alexandria, former home of the world’s greatest library, and Abu Simbel at the southern edge of the country near the border with Sudan. 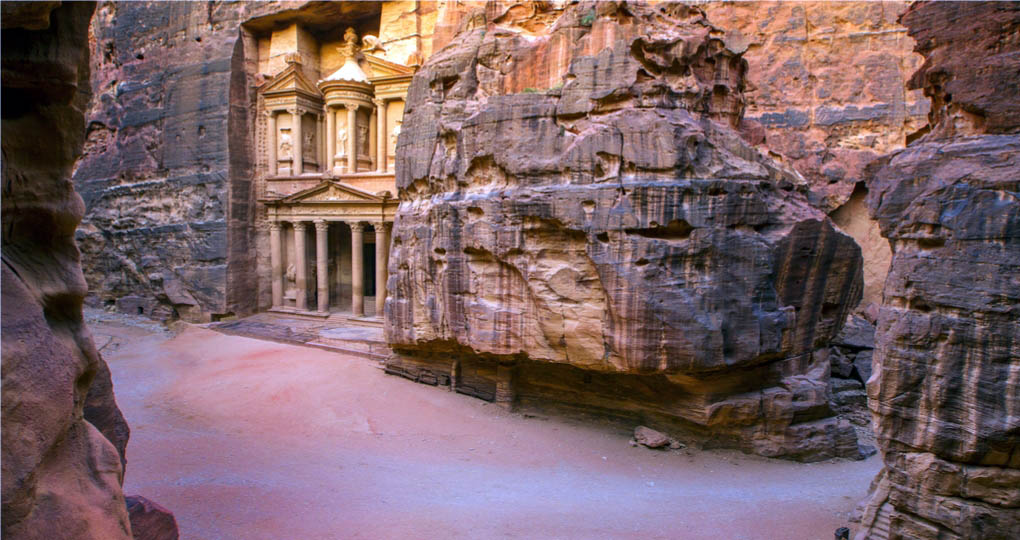 If you head on a Jordan vacation, it’s likely you’ll pass through the capital Amman, which is a comfortable, modern city with many great historical sites, including the Roman Citadel that overlooks the city. To the north of Amman, you’ll find the Greco-Roman ruins of Jerash, including Hadrian’s Arch and the columns of the Temple of Artemis. Um Qais in the extreme north has views over the Sea of Galilee while Wadi Rum in the extreme south is the perfect desert to satisfy nature lovers and adventurers. Petra is a little to the north of Wadi Rum and is the most essential landmark in the entire country. To the southwest of Amman, you’ll also find the Dead Sea, the nation’s other big draw.

Jerusalem is the most essential stop in Israel. It is home to all the Jewish, Christian, and Muslim sacred landmarks that attract pilgrims from all over the world. It’s also one of the greatest historical cities you could explore. Along the Mediterranean coastline you’ll find Tel Aviv, which is essential for travellers wanting to take the pulse of modern Israel. In the country’s north, head to Nazareth to explore the hometown of Jesus. Just to the northeast of Nazareth, you’ll find the Sea of Galilee and the port city of Capernaum.

In the United Arab Emirates, most travellers focus on Dubai and Abu Dhabi, the two largest and most popular of the seven emirates. As well, we recommend that you make time to visit a desert like Rub Al Khali, while you’re on your Middle East vacation. Also, if you have interest in history, Al Ain in the country’s east will fascinate you with its many palaces, tombs, and museums. In Oman, travellers often focus on the capital Muscat and the desert of Sharqiyah, where you’ll find highlights like the pools of Wadi Ash Shab.

Although all of these countries have variations in geography and climate, the Middle East is fairly homogenous in terms of weather. It is hot and dry and since it’s in the Northern Hemisphere, its summer coincides with the summer of Europe and North America. If you’re wondering when to go to the Middle East, remember that the temperatures can exceed 45°C in summer and you should have your answer. Avoid the summer. The crowds are largest in the summer and the weather is at its hottest, so it can be uncomfortable to be out in the sun, seeing the temples and ruins that draw people to the region.

Spring is the best time to see the region, as the temperature is warm but not oppressive, and the deserts come to life with blooming flowers. Autumn and winter are also good times to visit, but autumn can still be very hot in certain destinations, especially the United Arab Emirates and Oman. Winter has pleasant temperatures, although the winds can grow cold in the deserts, especially at night.

How to Get There

It’s easy to fly to the Middle East. Flights to most destinations have a layover in London or Frankfurt before connecting to major centres like Cairo, Amman, and Abu Dhabi. However, there are direct flights from Toronto and New York City to destinations such as Tel Aviv and Dubai. If you’re flying from North America, flights will be long as the Middle East is essentially on the other side of the planet. However, Middle Eastern airlines like Emirates, Qatar, and Etihad offer some of the best flying experiences in the world, so know that even if you’re going to be in the air for a long time, if you’re paying a bit more to fly on these airlines, you’ll enjoy a comfortable trip.

The Middle East holds so many historical, cultural, and natural treasures. If you head to Egypt, Jordan, Israel, the United Arab Emirates, and Oman, you’ll be rewarded with stunning landscapes, welcoming cultures, and unbeatable historical landmarks. There’s no reason not to take advantage of the region’s wonders and head on a Middle Eastern vacation in your near future.

Guide to Private-Guided vs. Tailor-Made Vacations

At Goway, we want to get you ready for a triumphant return to travel. Part of that is giving you all the info about which destinations are trending and why you should book ahead. Another part is explaining the details behind how Goway labels vacations.

FIRST-CLASS | SMALL-GROUP: Embark on a first-class journey through Israel that showcases the country’s modern innovations and ancient wonders. Experience the modern pleasures of Tel Aviv before delving into the country’s past in Akko, Galilee, and Nazareth, floating in the waters of the Dead Sea, and exploring the religious treasures of Jerusalem.

FIRST-CLASS | TAILOR-MADE: Explore one of the world’s most futuristic cities with a 6-night stay in Dubai. Visit beautiful beaches, enjoy a warm, sunny climate, and take advantage of the city’s luxurious shopping and nightlife in between visits to the Burj Khalifa and nearby Abu Dhabi, the UAE capital.

FIRST-CLASS | PRIVATE-GUIDED: Enjoy a superb introduction to Ancient Egypt on this classic tour. Explore the Great Pyramids of Giza and Cairo’s medieval corners before you board your boutique sailing boat for your trip up the Nile from Luxor to Aswan to explore ancient temples and tombs.