Denmark, bordered by Germany, is a country made up of 443 islands of which 70 are inhabited with a population of around 5.6 million people. Technically, Greenland and the Faroe Islands are a part of the Kingdom of Denmark. The terrain is flat with little elevation and consists mainly of arable land. The largest area is the western peninsula of Jutland which contains the cities of Aarhus and Aalborg. The largest island is Zealand which includes the capital, Copenhagen. Denmark has often been cited as one of the most desirable countries in which to live. One of the added bonuses is that almost everyone speaks fluent English, which adds to the enjoyment of Denmark vacations.

What are the top cities to visit in Denmark?

The capital, Copenhagen, is a compact city and has much to keep the visitor occupied. There is a network of canals on which one can enjoy an entertaining cruise while becoming acquainted with the city. The best known and very attractive canal in Nyhavn with its brightly-coloured 17th and 18th Century gabled townhouses. 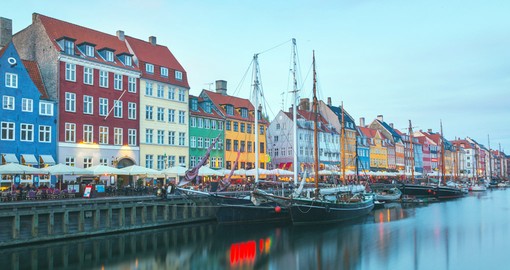 On Denmark vacations, why not visit Aarhus, the 2nd largest city in Denmark situated on the east coast of Jutland. It is where old meets new, from the 12th Century cathedral to the striking contemporary Iceberg apartment complex. The Latin Quarter is the most picturesque part of Aarhus with its cobblestone streets and 14th Century architecture. It is alive with culture and has been designated the European Capital of Culture for 2017. Its best-known art gallery is ARoS, one of the largest museums in Northern Europe. Other venues of interest are the Viking Museum and the Botanical Gardens. 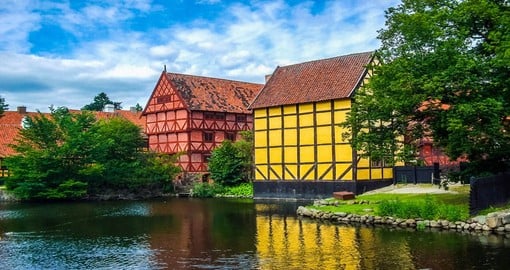 Aalborg is Denmark’s 4th largest city, situated at the northern tip of Jutland. It is known for its culture with its numerous theatres, symphony orchestras, opera companies and museums. It is a laid-back city with an old-world charm. The Aalborg waterfront has been gentrified with many restaurants and bars to enjoy on a Denmark vacation. It is also known for its annual carnival. The history of this 1,000-year-old city is depicted in the Historical Museum. Other interesting places to visit in Aalborg are the Museum of Modern Art, the Aalborg Historical Museum and the Utzon Centre designed by Jorn Utzon, who also designed the Sydney Opera House.

Top things to do on a Denmark tour

Denmark is a Monarchy and Copenhagen has three important buildings connected to the Royal Family. Christiansborg Palace is the seat of the Danish government but it is also used by the Royal Family for functions and special events. Amalienborg Palace is the official home of the Royal Family and consists of 4 identical palaces. Immediately outside of Copenhagen are Frederiksborg Castle, originally a royal residence, and Kronberg Castle which was featured in Shakespeare’s play, Hamlet. Rosenborg Castle dates back to the 17th Century and houses some of Denmark’s royal treasures. The Little Mermaid of Hans Christian Andersen fame sits in the harbour and is the official emblem of the city.

For entertainment on Copenhagen vacations, the Tivoli Gardens is a pleasure park with attractions, restaurants and cafes. The Stroget is a busy pedestrian street and the principal shopping district. Another landmark is the ultra-modern Opera House, one of the most expensive ever built. Nearby is the district of Christiana, a very different kind of neighbourhood founded by squatters and hippies as an independent district and now full of art galleries, restaurants and cafes. There are several excellent museums which include the Carlsberg Glyptotek with its sculptures and fine arts collections, the Design Museum, The National Museum and the National Gallery of Denmark. A little further afield is Roskilde, the former capital of Denmark and known for its Viking Ship Museum.

Legoland is located in Billund, a small town in Jutland. It is situated next to the Lego factory and is made up of multiple themed areas and attractions. Outside of Copenhagen, it is the most visited Denmark tourist attraction in Denmark and houses the world’s largest Lego model. 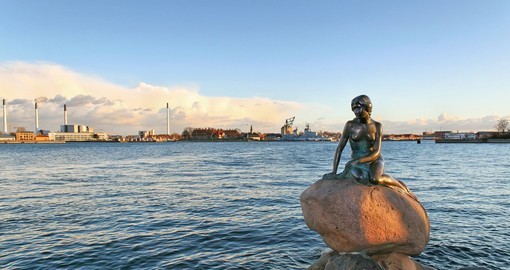 Scandinavia: A Comprehensive Selection of Travel Ideas for Your Northern Europe Vacation

Enjoy 3 Days in Copenhagen While on Your Europe Tour

Road-Testing the World’s Most Liveable Cities for 2016 (as Travel Destinations!)

Interesting, Different, and Unusual Art Galleries to Enjoy on a Europe Vacation

Consider an additional stopover to your Denmark vacation at one of Goway's other European destinations. You can choose from a Paris vacation, a London vacation or an Amsterdam vacation. This can be done stopping over en route to or from Denmark.

FIRST-CLASS | PRIVATE-GUIDED: Get to know the vibrant and colourful city of Copenhagen and visit neighbouring Malmo in Sweden. Tour grand canals, discover the culinary highlights of the Danish capital, and come to appreciate why Copenhagen consistently ranks among the world's most livable cities.